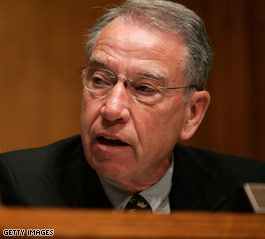 "Oh, we want all the endorsements we can get but that wasn't the purpose of it," Giuliani told CNN as he was departing Grassley's Hart building office.

But later his spokeswoman, Katie Levinson, confirmed to CNN the two men "had some very serious policy discussions, and yes, we asked for his endorsement."

The nearly one-hour meeting came just a few hours after Romney sat down with the fifth-term senator, who is an influential icon of Republican politics in Iowa. The scheduling of the meetings on he same day was a "coincidence," according to the Grassley's spokeswoman, Jill Kozeny.

Both candidates were in town to address the Republican Jewish Coalition.

Romney had several meetings on Capitol Hill Tuesday, said his spokesman, Kevin Madden. Besides Grassley, Romney met with House members who support his campaign. Madden would not discuss what Romney and Grassley talked about.

"Grassley said he'll meet with anyone who asks and he hasn't decided when, or if, he'll endorse a candidate in the caucus contest," Kozeny said. He met recently with GOP candidates Fred Thompson and Mike Huckabee.

Asked about his meeting with the former New York mayor, Grassley declined to comment, saying the meeting was private.