All in the family: Cheney and Obama related 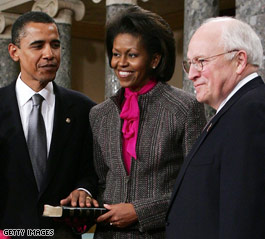 But could it be possible that Democratic presidential candidate Barack Obama and Vice President Dick Cheney share a common ancestor?

In an interview on MSNBC Tuesday afternoon, Mrs. Cheney said that in the course of researching her husband's genealogy for her new book, "Blue Skies, No Fences," she discovered that the two public figures share an ancestor eight generations ago.

"Think about this," Mrs. Cheney said. "This is such an amazing American story that one ancestor, a man that came to Maryland, could be responsible down the family line for lives that have taken such different and varied paths as Dick's and Barack Obama's."

According to Justice, the vice president is related to her through "the first" Richard Cheney, who came to America in the 1650's. His granddaughter married Samuel Duvall, son of Mareen Duvall.

But is blood thicker than the partisan waters of Washington? Apparently not.

Even though Obama is related to her husband, Mrs. Cheney said she is not supporting the Illinois Democrat's White House bid.

Reacting to the news, Obama's campaign spokesman Bill Burton told CNN's Dana Bash with tongue in cheek, "Obviously, Dick Cheney is sort of the black sheep of the family."

But Obama's family ties to the Bush administration don't stop with Cheney. According to an article in the Chicago Sun-Times last September, Obama is also an 11th cousin of the president himself. The two share a 17th century Massachusetts relative.