WASHINGTON (CNN) - The Republican Party is going back to the well and they are using the Clinton name as a bucket.

In an e-mail to potential donors, Republican National Committee Chairman Mike Duncan highlights a recent allegation that Sen. Hillary Clinton eavesdropped on political opponents in 1992 and suggests the New York Democrat is being hypercritical for not in turn supporting certain terrorist surveillance practices.

“The Clinton attack machine is apparently fine with listening in on phone calls if it bolsters her political ambitions - but Hillary doesn't want to give America's intelligence agencies the ability to conduct surveillance on terrorists plotting to attack our nation.”

“This isn't the first time we've seen Hillary practice such craven political opportunism,” Duncan adds. “She's flip-flopped on virtually every issue having to do with the War on Terror.”

The fundraising solicitation is the latest in a coordinated effort to paint Clinton as hypocritical on the issue of government surveillance in light of the allegation published in a recent book by New York Times reporters Don Van Natta and Jeff Gerth.

Clinton spokesman Philippe Reines has refused to comment on the substance of the allegation.

"It's a valiant effort by Jeff Gerth to get his 16th minute of fame, but we don't comment on books that were utter and complete failures, rift with inaccuracies and falsehoods, and rejected by reviewers and readers alike," Reines said.

Huckabee not ready to join Brownback

ABOARD THE ELECTION EXPRESS (CNN) – Former Arkansas Gov. Mike Huckabee is often mentioned in the same sentence as Kansas Sen. Sam Brownback, but Huckabee made clear Thursday he has no immediate plans to join his rival in abandoning a bid for the Republican presidential nomination.

Huckabee, who competed fiercely with Brownback for support from social conservatives, has had a difficult time competing with the frontrunners in both raising money and registering in the polls.

"It's not about the money, it's about the message," Huckabee said in an interview with CNN Chief National Correspondent John King in New Hampshire. "Our message is resonating and the more the message resonates, the more the money comes in. We are in a position where we have only seen one direction, we've gone up. And I am confident that will continue to happen as we approach the Iowa caucuses."

END_OF_DOCUMENT_TOKEN_TO_BE_REPLACED

Richardson to Republicans: We need the U.N

"[I will] introduce some Republicans to a basic reality," said Richardson. "[The] United Nations...is a necessary and important framework for building the international cooperation that will be necessary to confront problems like environmental degradation and poverty."

"As a former U.N. ambassador there - your ambassador there - I, more than
anyone in this race, understand the shortcomings of that institution," the New Mexico governor admitted. "But I also know the incredible power in the legitimacy of international cooperation."

Richardson also took shots at his opponents - both Democratic and Republican - over their international resumes.

"My colleagues in this race have my respect, but it is a simple fact that the next international deal negotiated by any of them will be their first."

Majority say Mormonism not an issue

Most Americans say Romney's Mormon faith is not an issue.

WASHINGTON (CNN) - A vast majority of Americans say Mitt Romney’s faith will not be a factor in their decision on whether to vote for him. The former Massachusetts governor and Republican presidential candidate is a member of the Church of Jesus Christ of Latter-day Saints.

Nearly 77 percent of those questioned in a new CNN–Opinion Research Corporation poll say the fact that a candidate is a Mormon would not be a factor in the way they vote for president. 19 percent of those surveyed say they would be less likely to vote for a presidential candidate who’s a Mormon, and 3 percent say they would be more likely to vote for a Mormon.

Americans' attitudes towards Mormonism appear to be changing, and while it is unclear whether that shift had anything to do with Mitt Romney's presidential campaign, he may be the beneficiary. A year ago, only a third of all Americans believed that Mormons belonged to a Christian religion, and another third were unsure. Now only one in ten are unsure, and the number of people who believe that Mormons belong to a Christian religion has risen by 16 points to 50 percent. The bad news for Romney: four in ten think Mormons are not part of a Christian religion, and that number has also grown.

1,212 adult Americans were questioned for the survey. It was conducted by telephone on October 12-14, and has a sampling error of plus or minus three percentage points.

"Instead of giving assistance to developing countries [based] on human needs, on micro-lending, on renewable energy, we're giving U.S. foreign aid to build palaces and to corrupt dictators that are not helping us," Richardson said.

"I would not give him the kind of assistance we give him unless he does something about the safe havens of the terrorists. We have too cozy of a relationship with Musharraf."

Richardson made the comments while speaking with reporters in Des Moines
following a speech on 21st century global threats.

When asked if he felt Musharraf's government is a legitimate one, Richardson
said, "He was elected in a way that does not support legitimacy. He should have free and fair elections."

He immediately added that Musharraf "is the leader there," but that the United States should still be able to inflict diplomatic pressure.

"Pakistan is a strategic ally, but we should use our leverage on [Musharraf] to go after the terrorists and to become more democracy-oriented, like have an election," Richardson said.

UPDATE: Responding to an initial posting of this story, RNC spokesman Brian Walton told CNN in a statement, "When Bill Richardson is pretending to play the role of tough on national security, you know Halloween is almost here. It is quite a change from the Richardson who wants to hand off Iraq to the terrorists as quickly as possible regardless of the outcome."

Obama on Leno: Michelle can take on Bill Clinton

"My wife, is no slouch, you see - if there's a debate between Michelle and Bill, you know, I'm putting my money on my girl," he said on the Tonight Show with Jay Leno.

The Illinois Democrat also laughed off Leno's suggestion that he might want to reconsider leaving his wife alone with the former president.

"Michelle can handle herself," he quipped. "She doesn't play."

"Particularly among democrats, Bill Clinton is very popular," Obama said. "He's a great strategist. He's very smart when it comes to the politics of the Democratic Party."

But Obama sharply brushed aside suggestions Clinton was unbeatable and said the New York Democrat's early coronation as the party's nominee reminded him of President Bush's now infamous appearance on the USS Abraham Lincoln.

"Hillary is not the first politician in Washington to declare 'Mission Accomplished’ a little too soon," he said to laughter and cheers. "So we've got a long way to go before the first vote is cast."

Brownback will announce Friday he's bowing out of the presidential race.

The sources tell CNN Chief National Correspondent John King that Brownback plans to bow out of the race Friday and that the announcement will be made back home in Kansas. They also tell CNN that the Brownback campaign has less than $100,000 of cash on hand left in the bank and little prospect of improving fundraising due to the senator’s low poll numbers. The sources say that they know of no immediate plans for Brownback to endorse another Republican candidate, but note that the senator has said he would support the eventual GOP presidential nominee.

Fred Thompson campaigned outside of Atlanta Thursday as his wife, Jeri, looked on.

Thompson spoke to reporters as he picked up endorsements from three elected county officials in Georgia's Cobb County - a heavily Republican area in the northern Atlanta suburbs. Underscoring the theme of the trip, Thompson was introduced as "the only conservative who can beat Hillary Clinton."

The former Tennessee senator blasted rivals for previous stands on abortion and immigration, telling the crowd in an airport hanger, "I was walking the walk" on conservative issues while others weren't even talking the
talk yet."

Thompson said that while in the Senate he had opposed cities that declared themselves sanctuaries for illegal immigrants at the same time, he said, Giuliani allowed that action as mayor of New York City.

Romney has tried to make an issue of Giuliani's position, but Thompson said the former Massachusetts governor "didn't say anything about sanctuary cities until recently."

Appealing for conservative support, he told the gathering he had a 100 percent record opposing abortion rights, saying of his rivals, "I'll ask anybody to compare their record with mine in terms of where they were yesterday, where they are today, and more importantly, where they'll be tomorrow. You can look and see where a fellow is liable to go in the future based on where he's been in the past."

Advocate votes with her feet

Social Security advocate is walking for a cause.

When CNN bumped into her Tuesday outside of the New Hampshire
statehouse, she was sporting an ostrich outfit and a neon green t-shirt
reading "New Hampshire cares about Social Security."

Dent plans on championing her cause by walking across the Granite State.
She began her journey Tuesday in Keene, and won't stop until she reaches Portsmouth. All told, that's a 106 mile trip.

Why the ostrich outfit? "Get your head out of the sand and start talking
about Social Security," Dent said. 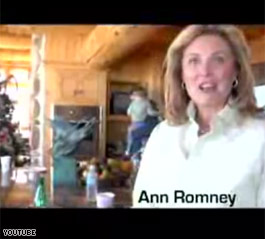 (CNN) – As part of his ongoing effort to reach out to the GOP's conservative base, Republican presidential candidate Mitt Romney released a new Web ad Thursday emphasizing the importance of family values by showcasing his five children and ten grandchildren.

In the ad, the former governor’s wife, Ann Romney, states, "Mitt says there's no work more important than what goes on within the four walls of the American home."

The ad, entitled “Our Home,” has been posted on YouTube, the official Romney campaign Web site, and Mrs. Romney's personal Web site, AnnRomney.com. It is a montage of both home videos and professionally produced clips of Romney surrounded by his children and grandchildren.

The ad was released a day before Romney is scheduled to attend the conservative “Value Voters Summit” in Washington. The summit, which is sponsored in part by Dr. James Dobson’s Focus on the Family and Tony Perkins’ Family Research Council, may prove to be an important forum for the Republican contenders to address the role of religion in public life. Romney’s Mormon faith is widely perceived to be a concern among many of the conservative Christian activists currently being courted by his campaign.

The former Massachusetts governor drew renewed criticism from his opponents last week for continuing to claim that he is the candidate who best represents the GOP’s conservative base.