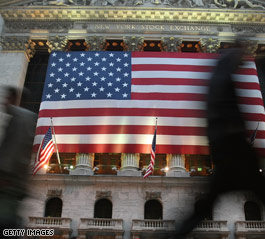 WASHINGTON (CNN) - Nearly half of Americans feel the U.S. economy is in a recession, marked by a significant decline in economic activity, according to a survey released Thursday.

The poll by the CNN-Opinion Research Corporation found that while 46 percent of Americans hold that belief, 51 percent don't.

The GDP measures the economy's output. It represents the total market value of all goods and services produced in the United States during a specified period.

The recession findings may be having an impact on President Bush's approval rating.

CNN Polling Director Keating Holland says "a majority of whites also disapprove of Bush, although four in 10 have a favorable view of his administration. The president's approval rating has been stuck at 36 percent since late summer."