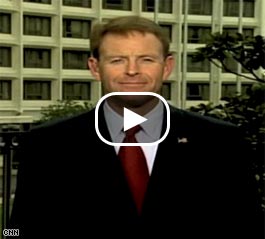 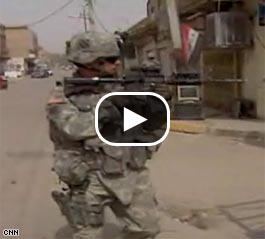 Is the American public suffering from "Iraq syndrome?"

(CNN) - A new poll about Iran and Iraq was released by CNN and the Opinion Research Corporation Friday.  Senior Political Analyst Bill Schneider takes a look at how the public's feelings about Iraq may be influencing public sentiment toward Iran.

Watch Brownback drop out of the White House race.

(CNN) - Mired in single digits in the polls and trailing his rivals in fund-raising, Sen. Sam Brownback of Kansas announced Friday afternoon that he is pulling out of the Republican presidential race.

"My yellow brick road just came short of the White House this time," Brownback said at a news conference in his hometown of Topeka.

Edwards: I can win across the country

“Here's the deal - If we don't have a good person at the top of the ticket – someone who can help stop the hemorrhaging in Missouri, then we'll go red,” Missouri state Minority Whip Connie Johnson said. “It's as simple as that. And it will affect state reps, state senators, treasurers, governors, everybody.

“If Hillary comes to a state like Missouri, we can write it off,” Johnson added, referring to Democratic field’s frontrunner, Hillary Clinton.

Martinez out as RNC chief

Sen. Mel Martinez announced Friday he is resigning from chairman of the RNC.

Martinez, who is the GOP’s most prominent Latino lawmaker, said he accomplished his goal of helping put the RNC in the best position for the 2008 elections.

“It was my goal as General Chairman to lead the Party as it established the structure and raised the resources necessary to support our Presidential candidate and ensure Republican victories next November,” the Florida senator said in a prepared statement released by the RNC. “I believe we have accomplished those goals. That’s why it is the appropriate time for me to step down as General Chairman and continue to focus my energy on serving my constituents in Florida.”

While two GOP sources tell CNN that Martinez does believe he accomplished what he set out to do at the RNC, the sources noted that he also thinks serving in this national post has contributed to a decline in his political standing back home. Martinez is convinced he needs to focus more on his personal politics, the sources said. The senator is not on the ballot in 2008, but he is up for re-election in 2010.

Martinez officially became general chairman in January, when his selection by President Bush was endorsed by the national committee. Bush extended that offer last November, just after Republicans lost control of the House and Senate. Martinez initially declined when then-White House political adviser Karl Rove called to ask him to take the post. But he accepted when the president followed up with a personal appeal. Bush praised Martinez Friday in a statement from the White House shortly after the RNC announced the senator was stepping down.

END_OF_DOCUMENT_TOKEN_TO_BE_REPLACED

DES MOINES, Iowa (CNN) - A Republican presidential candidate forum in Iowa is undergoing a few format changes due to a lack of participation from the GOP field.

Only three candidates - Arizona Sen. John McCain, Kansas Sen. Sam Brownback, and former Arkansas governor Mike Huckabee– had RSVP'd for the AARP/Iowa Public Television 'Divided We Fail' forum on October 25. But on Friday, with the news that Brownback will be ending his presidential bid, AARP announced that the format will turn into that of a town hall-style meeting. The organization will now hold individual forums with the candidates on health and financial security.

“Frankly, we’re disappointed that most of the Republican candidates, including the supposed front-runners, have chosen to skip Sioux City and our Divided We Fail Forum on health and financial security issues," Bruce Koeppl, AARP's Iowa director, said in a statement.

“There’s really no excuse for these candidates to not want to talk about the top domestic issues in Western Iowa with our members," he continued, "particularly since their campaigns were advised to save the date back in March and officially invited in July.”

END_OF_DOCUMENT_TOKEN_TO_BE_REPLACED

WASHINGTON (CNN) - Florida Sen. Mel Martinez plans to step down as general chairman of the Republican National Committee, after serving just nine months on the job, CNN has learned.

Two GOP sources, speaking on the condition of anonymity, tell CNN an announcement is planned for later Friday.
The sources say Martinez feels he has accomplished his goal of helping the RNC improve its financial standing after the 2006 midterm drubbing. But they also acknowledged that he believes serving in the national post has contributed to a decline in his political standing back home in Florida, and the senator is convinced he needs to focus more on his personal politics. The senator, who is the GOP’s most prominent Latino spokesman, is not on the ballot in 2008, but is up for re-election in 2010.

Martinez officially became general chairman in January, when his selection by President Bush was endorsed by the national committee. Bush extended that offer last November, just after Republicans lost control of the House and Senate. Martinez initially declined when then-White House political adviser Karl Rove called to ask him to take the post. But he accepted when the president followed up with a personal appeal.

At the same time Martinez became the general chairman, longtime national party operative Mike Duncan of Kentucky was chosen to be the RNC chairman. Duncan runs the day-to-day affairs of the committee, while Martinez served more in a fundraising and spokesman's role.

Duncan will stay on as chairman.

Dodd with Secretary of State William Gardner after filing for the New Hampshire Primary.

New Hampshire Secretary of State, William Gardner, was in attendance and handed him a pen to sign his name on the application. When Dodd realized the pen was dry, he replied, “No ink in here. Where’s the Republican!” Gardner advised Dodd to “use your own pen.”

At a press conference following the filing, Dodd explained why New Hampshire and Iowa are so important to his campaign.

“This is very good for the country,” Dodd said. “If New Hampshire and Iowa did not exist, I don’t think I could be at this table today, candidly. We ought to have a process that allows people of talent and ability and experience to run for the presidency without having to be multi-millionaires or have the access to multimillions here. That’s what would happen if you eliminate this process.”

Dodd is registering at around 1 percent in most polls.

Related video: Watch a clip of Sen. Dodd in New Hampshire on Friday

WASHINGTON (CNN) - Kansas Sen. Sam Brownback also addressed the summit – despite accounts from sources close to him indicating that Brownback is on the verge of ending his quest for the Republican presidential nomination.

Brownback spoke of the need to fight to outlaw abortion, and to defend the role of faith in America's political and public life.
He made no mention of his candidacy, or his plans to end it.

Several sources close to Brownback have said he planned to make an announcement as early as later Friday in his home state of Kansas.