Biden received the endorsement on Saturday.

(CNN)–Sen. Joe Biden, D-Delaware became the first Democrat in the presidential race to receive an endorsement from an Iowa newspaper.

The Storm Lake Times, in Storm Lake, Iowa, announced its endorsement of Biden in Saturday's edition of the paper.

"We have seen all the Democratic presidential candidates, except for two, up close and personal: Joe Biden, Hillary Clinton, Chris Dodd, John Edwards, Barack Obama and Bill Richardson," the paper said Saturday. "Biden is our choice for the nomination for the powerful personal story he shares, for his deep knowledge of international affairs, and for his long record of exemplary service in the United States Senate."

"Biden is the chairman of the Senate Foreign Relations Committee. Nobody, including the president, has a firmer grasp of international affairs," the paper went on to say. "That’s what we need right now: Someone who can restore the good name of the United States of America around the world, who can hold the torch lighting the way of liberty and human rights throughout the world. Biden is that man. He says his first order of business will be to shut down Guantanamo Bay prison and quit torturing people."

The paper also made a point to address what they thought were important domestic policies Biden would pursue as president. "And, we need someone who understands civil liberties here at home. Biden says that will be the theme of his inaugural address, if elected," the paper said. "You can’t preach liberty abroad when you’re spying without court orders on your own citizens."

The Biden campaign announced the endorsement in an email release to reporters. “This endorsement makes a powerful case for why Joe Biden is the person best prepared to become President on day one and reflects the growing support among Iowans who are coming to this conclusion after meeting all the candidates,” Luis Navarro, Biden's campaign manager, said in the release.

Biden was scheduled to spend the weekend campaigning in Iowa.

MANCHESTER, New Hampshire (CNN)- ­What better place to hold a "Meet and Greet" than on Manchester's Elm Street?

Gov. Bill Richardson swung through the J.W. Hill restaurant for a quick rendezvous with campaign supporters and prospective voters.

Among those eager to see the Governor, Cuban born turned Manchester native, Anna Lopez who brought her husband and daughter.

"I like to support him because he's Latino and I think he knows the Latinos plight because he used to be an immigrant. I share his views on immigration," Lopez said.

The presidential hopeful will make five stops in the Granite state on Sunday: Pelham, Bedford, Hollis, Rindge and Keene.

The top bidder paid over $2 million for a Senate letter slamming Limbaugh.

That was the winning eBay.com bid Friday for a letter sent to Clear Channel CEO Mark Mays officially calling on him to condemn the comments in question. The letter was written by Senate Majority Leader Harry Reid and signed by 40 Democratic senators, including White House hopefuls Barack Obama and Hillary Clinton.

Mays refused to condemn the remarks and Limbaugh placed Reid's letter on the popular auction Web site last Friday, pledging to match whatever it fetched and donate it all to The Marine Corps – Law Enforcement Foundation.

When the Ticker first checked in Tuesday, the bidding stood at $50,000 - already a significant price for a standard Senate letter, but ultimately more than $2 million short of what the letter finally fetched Friday.

“The government tried to take away my living, by sending this letter to Mark Mays at Clear Channel and asking him to confer with me about my remarks,” Limbaugh said on his show Friday announcing the winning bid. “Private citizens, of their own accord - without a government mandate, without an Al Gore pledge - responded with creativity, and charity, and a sense of fun.”

Limbaugh identified the winning bidder as Betty Casey, a philanthropist and trustee of the Eugene B. Casey Foundation

“We cannot thank her enough for her support in this, and I am honored, and proud, and happy to be matching her,” Limbaugh said of Casey.

“Now, everyone knows that Rush Limbaugh and I don't agree on everything in life and maybe that is kind of an understatement,” Reid said. “But without qualification, Mark Mays, the owner of the network that has Rush Limbaugh, and Rush Limbaugh should know that this letter that they're auctioning is going to be something that raises money for a worthwhile cause.”

Though Limbaugh made clear he wasn’t ready to bury the hatchet with the Senate’s top Democrat.

“I asked Senator Reid to go on the program and discuss his discussion of me as ‘unpatriotic,’” Limbaugh said on his show Friday after Reid’s speech. “He did not accept my offer to do that, and now has the audacity to climb aboard this, praising the effort, saying that ‘he’ never knew that it would get this kind of money. It got this kind of money because it represents one of the most outrageous abuses of federal power in modern American history, and that is what makes it a collector's item.”

Reid's spokesman Jim Manley later told CNN, "The irony of the situation is that this charity managed to benefit from [Limbaugh's] completely outrageous and offensive comments."

No breakfast, but key endorsement served up for Dodd

While Craig was quick to enumerate Dodd's credentials, he admitted that it was Dodd's character that helped him make his decision.

"Personally, I have to say that I'm looking for someone who's a real person. And I've met most of the candidates last year and this year," Craig said.
"Everybody's on your side when you're running but when you lose, your friends stick around. And the only person who really reached out to me after my defeat was Chris Dodd and that says a lot to me on a personal level."

(CNN)–Former Massachusetts Governor Mitt Romney received an endorsement from a leader of the pro-life community on Saturday.

John Wilke, a physician, and president of both the Life Issues Institute, and International Right to Life Federation made the endorsement according to a release from Romney's campaign. "Unlike other candidates who only speak to the importance of confronting the major social issues of the day, Governor Romney has a record of action defending life," Wilke said in the release. "Every decision he made as Governor was on the side of life. I know he will be the strong pro-life President we need in the White House," he said.

"I am proud to have the support of a man who has meant so much to the pro-life movement in our country," Romney said in the same release from his campaign. "He knows how important it is to have someone in Washington who will actively promote pro-life policies. Policies that include more than appointing judges who will follow the law, but also opposing taxpayer funded abortion and partial birth abortion," Romney said.

Romney highlighted his pro-life and strong family platform in an address to a gathering of Christian conservative voters in Washington, D.C. on Friday night. He is scheduled to participate in a debate with his fellow GOP rivals Sunday night in Orlando, Florida.

Biden took a jab at Obama Friday night while speaking with reporters.

DES MOINES, Iowa (CNN) - Democratic presidential candidate Joe Biden said Friday that whoever moves in to the White House in 2009 will be left with so many problems that he or she will be left "with no margin for error."

The senator from Delaware appeared to single out one Democratic opponent–Illinois Sen. Barack Obama–in particular.

"One of the candidates says experience doesn't matter [and to] look at Cheney and Rumsfeld and the rest," Biden said. "Well I say look at the president– he had no experience."

Obama has often said in stump speeches that Vice President Dick Cheney and former Secretary of Defense Donald Rumsfeld had two of the longest resumes in Washington and it "hasn't worked out so well."

Biden added that the next chief executive will have to end the war in Iraq immediately, keep Iran from erupting into a war, and re-establish the good will and reputation of the United States.

"It's not going to be able to be something that they're going to have time to contemplate," Biden said. "They better pretty well know exactly what they want to do before they take the office."

Biden made the comments to reporters after speaking at the Polk County Democrats Auction and Fall Dinner in Des Moines. New York Sen. Hillary Clinton and New Mexico Gov. Bill Richardson also spoke to the group. 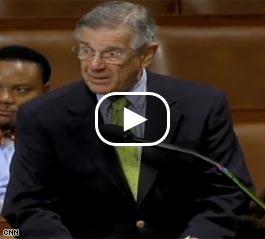 Bobby Jindal and his wife Supriya campaign after casting their votes in Louisiana's governor's race.

WASHINGTON (CNN) - Second chances don’t come around that often in life. But Bobby Jindal’s getting one Saturday.

Jindal’s a Republican congressman from Louisiana. Four years ago he lost an extremely close governor’s race to Democrat Kathleen Blanco.

On Saturday, however, the three term congressman is expected come out on top in Louisiana’s gubernatorial primary election.

Blanco’s not running for re-election. Her political fortunes were greatly damaged by both the state and federal government’s response to Hurricane Katrina. Blanco announced earlier this year that she was dropping out.

Jindal, the Oxford-educated son of Indian immigrants, is far ahead of his eleven rival candidates, and the only question is whether he’ll win 50 percent of the vote and avoid a runoff election.

Louisiana does things a bit differently when it comes to holding elections. Candidates of all parties compete in an October primary, and if no one wins 50 percent of the vote, the top two candidates face off in a November runoff.