Huckabee: Next terror attack may come from Pakistan 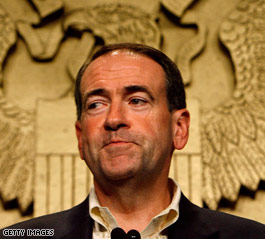 Huckabee said the next terror attack on the U.S. could originate in Pakistan.

(CNN)–GOP Presidential hopeful Mike Huckabee says America needs to remain enagaged with Pakistan, because the next terrorist attack against the United States could come from there.

Appearing on 'Fox News Sunday', Huckabee was asked by Chris Wallace to respond to criticism that he lacks the foreign policy experience that would prepare him for the presidency.

Wallace asked Huckabee how he would approach relations with Pakistan. Huckabee said "we need to keep our eyes on Pakistan. I think we've sort of taken a view that everything is OK there, and it's not OK there," he said. "Let's not forget, it's somewhere in the caves of Pakistan where Osama bin Laden is hiding. The next missile bomb that maybe comes our way, the next terrorist attack, is probably going to be postmarked Pakistan."

Huckabee is scheduled to appear in a debate with his fellow GOP rivals Sunday evening in Orlando, Florida.

On Saturday, he finished a close second in total votes, to former Massachusetts governor Mitt Romney, in a straw poll of conservative voters at the Values Voters Summit, sponsored by the Family Research Council in Washington, D.C. The total numbers included participants both present at the event, and online. Huckabee scored a decisive victory over his rivals, based on votes cast by voters physically present at the summit.

Clinton: I'm no frontrunner in Iowa

DES MOINES, Iowa (CNN) - Democratic White House hopeful Sen. Hillary Clinton, D-New York, said Saturday that she looks at her campaign as if she were "ten or twenty points behind."

Clinton–ahead in the latest national polls by as much as 30 points–made the comments to reporters when asked if she considers herself the frontrunner in Iowa, a state where she holds a much smaller lead.

"No," Clinton said. "I consider myself someone who's working as hard as I can everyday to earn the support of Iowans, and that's what I'm going to keep doing."

"I'm well aware that no one has voted. No one has caucused. We have a long way to go before that happens and I don't take anything for granted."

In the latest Des Moines Register poll among 399 likely Democratic caucusgoers Clinton was in the lead in the Hawkeye State with 29 points. Former Sen. John Edwards, D-North Carolina, sat at 23 points, and Sen. Barack Obama, D-Illinois followed closely with 22. The margin of error was plus or minus 4.9 percentage points.

The announcement came Saturday during the Values Voter Summit. Romney garnered 1,595 votes and former Arkansas Gov. Mike Huckabee coming in a close second with 1,565 votes. A total of 5,775 votes were cast online, by mail, and at the event.

Only members of the political arm of the Family Research Council could vote. During the voting period, the organization saw an increase in membership from approximately 5,000 members to approximately 8,500 according to Tony Perkins, President of FRCAction.

The number of people who voted in person at the conference was far less than the number who voted online or by mail. Huckabee was the clear winner of the in person votes with 488 of the 952 votes. Romney received only 99 in person, on site votes.

Huckabee likens abortion to a holocaust

(CNN)–Speaking before a gathering of Christian conservative voters, GOP presidential hopeful Mike Huckabee said legalized abortion in the United States was a holocaust.

"Sometimes we talk about why we're importing so many people in our workforce," the former Arkansas governor said. "It might be for the last 35 years, we have aborted more than a million people who would have been in our workforce had we not had the holocaust of liberalized abortion under a flawed Supreme Court ruling in 1973."

Huckabee also spoke adamantly of the need for conservative lawmakers to show no compromise on fighting for a constitutional amendment that defines marriage between a man and a woman. "I'm very tired of hearing people who are unwilling to change the constitution, but seem more than willing to change the holy word of God as it relates to the definition of marriage," he said.

Giuliani: You have nothing to fear from me

Giuliani told a gathering of Christian conservative voters, "You have nothing to fear from me.".

WASHINGTON (CNN) - Former Mayor Rudy Giuliani, R-New York, spoke before the Family Research Council's Values Voter Summit Saturday telling the Christian based crowed "you have nothing to fear from me."

The White House hopeful came to the event facing opposition for his stance on abortion rights. He addressed the issue head on saying that he would continue the model he used while mayor of New York to "increase adoptions and decrease abortions."

Giuliani, who supports abortion rights, said he would continue to support the ban on partial birth abortions, support parental notification laws, and support the Hyde amendment, which denies federal funding for abortions. He would also make the $10,000 tax credit for adoptions permanent and "cut the red tape" involved in the adoption process. He continued by saying he would make judicial appointments in the mold of Chief Justice John Roberts, Justice Anthony Scalia, Justice Clarence Thomas, and Justice Samuel Alito, who are the most conservative members of the Supreme Court.

The former mayor told the audience that he came before them "with an open mind and an open heart, and all I ask is that you so the same."

But he also made it clear the he would not "pretend that I can be all things to all people."

He emphasized that he would not change his beliefs in order to tell them what they wanted to hear and at the same time made a veiled attack on his Republican rival Mitt Romney.

"For me to twist myself all up, to try to figure out exactly what you want to hear, and today say one thing and tomoorow say another thing, and a year from now, if you do that too long, you lose the sense of what leadership is all about," said Giuliani.

"Isn't it better that I tell you what I really believe," Giuliani asked the audience, "instead of pretending to change all of my positions to fit the prevailing winds?"

Former Massachusetts Gov. Mitt Romney at one time supported abortion rights but has since reversed his position on the issue.