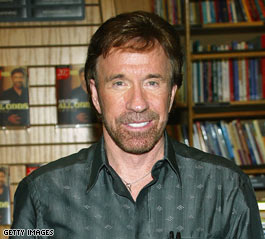 WASHINGTON (CNN) - It could be the latest so-called Chuck Norris fact: The American people don't choose presidents, Chuck Norris does.

“Though Giuliani might be savvy enough to lead people, Fred Thompson wise enough to wade through the tides of politics, McCain tough enough to fight terrorism and Romney business-minded enough to grow our economy, I believe the only one who has all of the characteristics to lead America forward into the future is ex-Arkansas Gov. Mike Huckabee,” Norris wrote on the conservative Web site World Net Daily.

“Mike is also a respected and fearless leader, and he does not cower to the cries of any majority or minority,” Norris added. “He doesn't abandon his values for what's expedient. Like our Founding Fathers, he's not afraid to stand up for a Creator and against secularist beliefs.”

Huckabee’s campaign has not responded to a request for comment.