Huckabee and McCain ask 'Where's everybody else?' 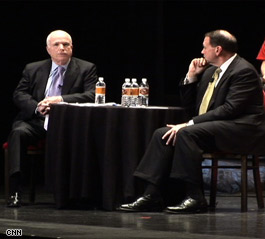 Huckabee called the rest of the Republican field 'the losers' for not showing up alongside him and McCain at an AARP-sponsored forum in Iowa.

SIOUX CITY, Iowa (CNN) - Former Arkansas Gov. Mike Huckabee said Thursday night that he regrets the fact that he and Sen. John McCain, R-Arizona, were the only two Republican presidential candidates to show up at the AARP-sponsored 'Divided We Fail' forum held in Iowa.

"I think that frankly they're the losers for not being here," Huckabee told reporters following the forum. "I thought the format was the most refreshing we've had in this entire presidential campaign."

That format, which was originally planned as a standard debate, was re-configured as a town hall-style meeting with the two candidates after little response from others in the GOP field.

In his closing remarks on stage, McCain said, "Frankly I regret that the other candidates for president of the United States in the Republican Party are not here tonight because it would have been very valuable."

"The original plan," Huckabee added, "was that all of the eight Republican presidential candidates would be here, and as you can see only two of us were willing to come and face you. I don't know what they were afraid of–you've been an awfully nice group of people tonight."

"Senator, I don't know about you, but I think there's enough for people to choose from [with] just the two of us. Let's just keep it this way," Huckabee said to a round of applause.

The Democratic portion of the same forum held last month on the opposite side of the state included all major Democratic candidates except one.