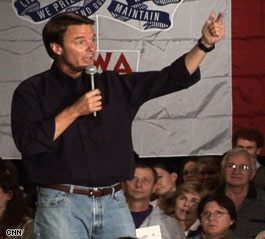 The amendment–sponsored by Sens. Joe Lieberman, I-Connecticut, and Jon Kyl, R-Arizona–calls for labeling the Iranian Revolutionary Guard a terrorist organization.

That statement was followed by an immediate round of booing.

"She's entitled to her opinion," Edwards said over the noise. "But I share your opinion."

Edwards claims the amendment would "pave the way for Bush to continue to march forward on Iran."

"I didn't understand it," Edwards said. "And then I saw a story in the New York Times [that] quoted some of her supporters explaining why she did it, and the explanation was–I want to get this right–that she was moving from primary mode to general election mode."

A New York Times article from October 14 claimed Clinton's backers have said privately that she is now switching to general election mode, which would imply she's running as the presumptive nominee.

"Was I asleep in North Carolina when you had the Iowa Caucus? I don't think
so."

"I think we're going to have a real election and a real campaign here in Iowa. I can tell you one thing, I will never take a single Iowa caucusgoer for granted."