Time to get tough?

Watch Candy Crowley's report on what Sen. Obama is doing to get tough on Sen. Clinton and her policies.

(CNN) - In a presidential nomination race that seems like it's gone on forever, there are only 66 days left until the Iowa caucases.  Candy Crowley takes a look at whether it's time for Sen. Barack Obama, D-Illinois, to get tough with one of his chief rivals - Sen. Hillary Clinton, D-New York.

In the 30-second spot, Clinton highlights her role as an advocate for the elderly by focusing on key issues of the demographic: Social Security and long term health insurance. Clinton asserts she is the candidate that has been with seniors “all along.”

The Republican National Committee immediately responded with a sharp critique of the New York Democrat’s ad.

“How can Senator Clinton claim to be there for you, when she won’t even give a straight answer on how to save Social Security? The one thing we know about Hillary Clinton and Social Security is that she was definitely there in the White House when Bill raised taxes on benefits and she was definitely there in the Senate when she refused to repeal it.”

Giuliani and wife Judith picked pumpkins in New Hampshire over the weekend.

WASHINGTON (CNN) - Republican presidential candidate Rudy Giuliani highlights his successful battle with prostate cancer in a new radio ad out Monday, and claims a "socialized" healthcare system would have significantly decreased his chances of survival.

“You and I should be making the decisions about what kind of health care we get with our doctors, not with a government bureaucrat," Giuliani continues in the ad. "What we need to do is to give people a $15,000 deduction for a family, a $7,500 deduction for an individual so they can go out and buy their own health insurance.”

All the leading Democratic presidential candidates have proposed universal healthcare plans, a policy approach Giuliani has often referred to as "socialist."

Giuliani dropped out of the New York Senate race in the spring of 2000 after announcing he was diagnosed with prostate cancer. He underwent successful surgery the following September.

Steve Marchand, the 33 year-old mayor of Portsmouth, stressed in a conference call with reporters on Monday afternoon that Richardson has the right approach when it comes to the war in Iraq.

“More than any other candidate running for president this year on either side of the aisle, I think Gov. Richardson appreciates the role diplomacy has to play in resolving this situation we’re now in in Iraq, in a way that’s going to minimize the damage for the day when America is gone, and maximize the chance there’ll be some kind of long-term stability in the region,” he said.

In the same conference call, Richardson hailed the endorsement as a “clear sign of momentum for my campaign…mainly because Steve is a grassroots campaigner and he is someone who gets votes.”

But the timing of Richardson’s endorsement could be overshawdowed by news that New Hampshire Sen. Judd Gregg was backing former Massachusetts Gov. Mitt Romney’s presidential bid.

"I would say that given the fact that this announcement happened on the very same day as Judd Gregg announced that he was endorsing for Mitt Romney, unfortunately Bill Richardson lost the endorsement race on this day,” Scott Spradling, the political director of New Hampshire’s WMUR-TV, told CNN.

A double scoop of good news for Romney

Gregg endorses Romney before heading to state capitol to file .

The former Massachusetts governor made the announcement outside the New Hampshire Political Library.

“We have history in the making and then to have the support of Judd and Kathy Gregg this is just so wonderful,” Romney said.

Following the endorsement, Gregg and his wife, Kathy, led the crowd of campaign supporters through the halls of the statehouse to Secretary of State William Gardner’s office.

After signing his name, Romney met with reporters and discussed the personal historical significance of his filing.

“I’m also thrilled as you can imagine to be sitting in the seat, I imagine my father sat in 40 some odd years ago when he declared his candidacy,” Romney said. “I intend to follow his footsteps up to a point– and the point is I plan on winning.”

END_OF_DOCUMENT_TOKEN_TO_BE_REPLACED

One of the ads, "Catching On," shows interviews with New Hampshire voters praising Paul and saying that he would lower taxes and remove troops from Iraq immediately. "He's catching on, I'm telling you," a man says at the end of the commercial.

In the second ad, "Troops and Deficit," Paul stands in front of a blown up copy of the Constitution. "Once we stop wasting trillions overseas, we can cut the budget and still help people who need it," Paul says, addressing the camera.

Paul's campaign said he will spend $1.1 million on the commercials. They will both run on a rotation in New Hampshire.

Romney fires back at Thompson on Immigration

Romney files, then fires at Thompson.

CONCORD, New Hampshire (CNN) - Just hours before former Sen. Fred Thompson, R-Tennessee, filed for the New Hampshire primary, former Massachusetts Gov. Mitt Romney took aim at Thompson for criticizing him for not speaking out against “sanctuary city,” until recently and misrepresenting his position on immigration.

“As Governor I deputized our state police to be able to enforce immigration laws throughout the state and when a bill came to my desk saying that the children of illegal aliens were going to get a tuition break at school I vetoed that. I insisted on English immersions in our schools,” Romney said.

Romney reiterated his proposal to reign in federal funding to sanctuary cities, and added, he was glad Thompson had “bought on to the view that I espoused.”

Edwards gets on the New Hampshire ballot

"The Red Sox did OK last night," Edwards told New Hampshire Secretary of State William Gardner as he got set to file for the early primary.

"They ended it pretty quickly," replied Gardner, an avid Red Sox fan who watched his team clinch the World Series title over the Colorado Rockies in a four game sweep.

Later speaking with reporters, Edwards fielded questions surrounding his third-place standing in recent Granite State polls, and said it was too early to call the race.

"I know from my experience in 2004, what matters is what happens in the last 30 days, because that's when people are actually focused on the race," the Democratic presidential candidate said. Edwards placed a surprise second in the 2004 Iowa caucus, despite the fact many polls showed he would finish lower. He went on to finish third in the New Hampshire primary.

Edwards also dismissed on Monday the suggestion that the fight for the Democratic nomination was now a two-person race between Sen. Hillary Clinton, D-New York, and Sen. Barack Obama, D-Illinois.

"What happened in the election of November 2006 was a very clear signal from America, and from voters that they want something different," he said.

COLUMBIA, South Carolina (CNN) - Comedian Stephen Colbert brought his mock presidential campaign to the capital of South Carolina Sunday, where he was declared "favorite son" by the mayor of Columbia and given the key to the city.

The host of Comedy Central's "Colbert Report" is seeking to get his name on both the Republican and Democratic ballots for the South Carolina primaries in January.

"I am here not only to accept the honor you have given me but to prove to everyone that this campaign is real," Colbert said. "To put an end to the vicious rumors that this is not a serious candidacy."

He joked that, "Over the past 18 hours, this campaign has gone everywhere in this state, from Charleston to Columbia."

After spending several minutes espousing the quality of South Carolina peaches, Colbert laid out his vision for the future of the state.

END_OF_DOCUMENT_TOKEN_TO_BE_REPLACED

Tancredo puts all his chips on White House bid 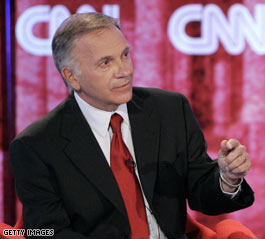 Tancredo has decided not to run for a sixth Congressional term.

WASHINGTON (CNN) - Rep. Tom Tancredo plans to retire from the House at the end of his term but will continue with his bid for the GOP presidential nomination, his office said Monday.

The story was first reported by the Rocky Mountain News, which said the 61-year-old Coloradan informed his staff Sunday night in a letter in which he said he feels he has accomplished what he had hoped to accomplish by raising immigration as an issue.

He added that he wants to spend time with his five grandchildren.

Tancredo, who was elected to Congress in 1998, was campaigning Monday in Iowa.