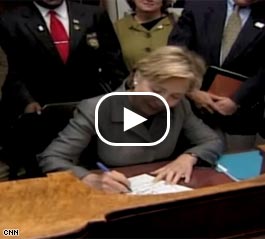 CONCORD, New Hampshire (CNN) – Sen. Hillary Clinton made it official Friday by signing her name on the last day of the New Hampshire primary filing period.

Following her signing, Clinton answered questions from reporters. She also joked there was less press the last two times she had been at the Secretary of State’s office.

“I’m very excited obviously about today,” Clinton said. “This is such a tremendous personal honor for me to be declaring my candidacy formally.”

A few critics have charged that she is waving the “gender card.” They point to her speech at her alma mater, Wellesley college, where she told female voters her time at the elite women’s college had prepared her to “compete in the all boys’ club of presidential politics.”

Asked if she received special treatment because of her gender, Clinton dismissed the suggestion and said her competitors were not piling on attacks because she was a woman, but rather because she was winning.

Clinton also discussed the issue of driver’s licenses for illegal immigrants, the issue that offered her competitors a window of opportunity to pounce at this week’s debate in Philadelphia.

“This is a complicated issue, it’s not easily answered yes or no,” said Clinton.

Clinton completed her two day tour of the Granite state with a rally outside the statehouse.