Roland S. Martin: There's a possibility the GOP presidential nominee may back gay and abortion rights.

(CNN) - "I will never vote for anyone for the president of the United States who supports abortion or gay marriage."

Those were the words spoken to me three years ago by a prominent pastor in the Dallas-Forth Worth area who has led a number of rallies on those two issues.

But the Rev. Pat Robertson's endorsement of former New York Mayor Rudy Giuliani puts front and center the day conservative evangelicals have said we would never see: a possible Republican presidential nominee who has been supportive of gays and abortion rights.

"I’m telling the CEOs it hurts America when they cash out and leave workers high and dry," Obama, D-Illinois, said in the ad. "It’s an outrage. And you’ve got to have someone in the White House who believes it’s an outrage."

The ad focuses on David Hartgrave, a former Farmstead employee from Cedar Rapids, Iowa. He said he was promised $1500 a month after he retired, but the company took $19 million out of the pension fund and he ended up getting $379.

"Barack Obama’s gonna look out for me," Hartgrave said in the ad.

The commercial started running in Iowa as Obama traveled through the state to promote his proposal to save American workers' pensions. As part of his plan, Obama said he would eliminate income taxes for seniors and protect social security benefits.

Obama rolled out his plan as a CNN/Opinion Research Corporation Poll shows him way behind Sen. Hillary Clinton, D-New York, among workers that make less than $50,000 a year. Of those workers, 51 percent supported Clinton, while 21 percent supported Obama.

President Bush said Wednesday that the U.S. is "making progress" in Iraq.

WASHINGTON (CNN) - Opposition to the Iraq war is at an all-time high despite reports of a reduction of violence in the country, according to a CNN/Opinion Research Corp. poll released Thursday.

Sixty-eight percent of poll respondents opposed the war, setting a new record. The level of opposition is slightly up from last month and 1 percentage point higher than the previous record of 67 percent, first set in December 2006 in a CNN/Opinion Research survey.

Support for the war in Iraq among Americans has dropped to 31 percent from 34 percent last month, the new poll found. 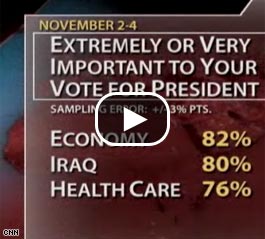 Watch Bill Schneider's report about the economy and the 2008 election.

WASHINGTON (CNN) - Despite the focus on Iraq and foreign policy in the 2008 White House race, Bill Schneider reports that concerns about the economy have edged out the Iraq war as the top concern of voters.  In other words, it's not the war, stupid. Watch Schneider's report.

Related video: Candidates and the economy

Related: Analysis: Could it be 'the economy stupid' again?

Watch Ed Henry's report about how Bush has become cozy with Sarkozy.

WASHINGTON (CNN) - French President Nicolas Sarkozy was the toast of the down during his first official visit to Washington, D.C.  Ed Henry reports.

The 3 R's of '08 endorsements: Robertson, Rudy, and the right 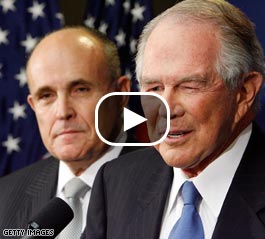 Watch John King's report about the significance of the Robertson endorsement.

(CNN) - Former New York City Mayor Rudy Giuliani has been courting the religious right in under to help secure the 2008 Republican presidential nomination. Christian Coalition founder Pat Robertson offered Giuliani some help on Wednesday when he endorsed the moderate Republican for president.

John King reports on Giuliani, Robertson and the social conservative wing of the Republican Party. 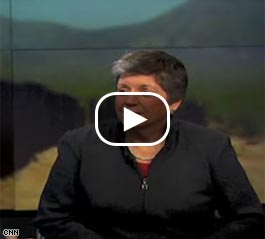 Clinton: Rice is good, but she's not enough

NASHUA, New Hampshire (CNN) - At a Granite state town hall, New York Sen. Hillary Clinton pledged to end the "era of cowboy diplomacy," and criticized the Bush administration for their unwillingness to send diplomats other than Secretary of State, Condoleeza Rice.

Clinton expressed concern over the crisis in Pakistan and shared with the audience that she had suggested in January for the President to send a senior diplomatic envoy to assuage tensions between the Afghani and Pakistani governments.

Instead, Clinton said, " Cheney went out, read everybody the riot out, about you behave, you do this, you do that. Left. That was the end of it."

"You have to laugh to stop from crying," Clinton said with frustration. "It seems like we have one diplomat, Condi Rice. She's an able woman, but she can't cover the entire world, and yet that's the only person that President Bush apparently is willing to send anywhere."

Clinton described U.S. foreign policy as "tainted" and damaged by the administration's disregard for international norms, treaties and conventions. She then added, "Their attitude is that somehow the United States not only should, but must, go at it alone. That's not going to work."

Responding to Clinton's comments, Republican National Committee spokesman Brian Walton said, "The same Hillary Clinton that can’t take a consistent position on Iraq, opposes the monitoring of phone calls of terrorists that want to kill Americans, and follows the lead of MoveOn.org when it comes to funding our troops has no credibility when it comes to national security issues."

And this time, he's using her interview aboard CNN’s Election Express to make his point.

The video, entitled 'Politics of Parsing – Part 2,' focuses on Senior Political Correspondent Candy Crowley’s question asking if Sen. Clinton supports drivers licenses for illegal immigrants. Clinton starts by saying, "No. What I have said is that I support what governors are trying to do" and then continues on with her response. After Crowley interrupts by asking, "But you can see why people think that you are not answering the question," the video displays a series of graphics saying "What's Senator Clinton's answer? Nobody knows… Not even Senator Clinton”.

Sen. Clinton's campaign responded to that video by saying of Edwards, "now that his campaign has stalled, he's launching false attacks on his fellow Democrats.” The Clinton camp didn't respond Thursday to Part 2.

Rudy Giuliani popped into West Columbia for about 45 minutes Wednesday afternoon to meet a small group of supporters at his headquarters. SC Hotline has the video, in which he talks about his Pat Robertson endorsement.

But perhaps more relevant to today's news cycle: There was a lone protester in a Giuliani mask outside the event, holding up a "FREE BERNIE" sign. Bernie Kerik, that is. Which rival campaign put him up to it?

Bill Richardson's campaign is re-directing staff from South Carolina to Iowa, signaling that Iowa is a must-win for Richardson.

Dan Hoover examines how Fred Thompson is pitching himself as the real conservative in the Republican race, despite several high-profile Christian endorsements for his opponents this week.

John O'Connor at The State asks: "Will surging Thompson run out of steam?"

And in case you missed Mitt Romney's appearance with Big Eddie on Wednesday morning, check out the photos here.