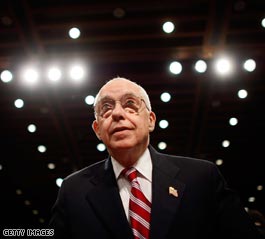 Assistant Attorney General for the Civil Division Peter Keisler, who has doubled as acting attorney general in recent weeks, is expected to leave the department within days. Keisler had announced his planned departure and was within a day of leaving when then-Attorney General Alberto Gonzales announced his surprise decision to resign. President Bush asked Keisler to stay on to head the department until a successor was confirmed, and he agreed.

Acting Deputy Attorney General Craig Morford is expected to remain in his post for now.

The Senate voted to confirm Mukasey Thursday night, 53-40, despite complaints from some Democrats about his refusal to brand as torture a controversial interrogation technique known as "waterboarding."

Mukasey, 66, will take over a Justice Department beset by a number of high-level vacancies and congressional investigations. Gonzales resigned under fire in September.

Related: Mukasey to be sworn in as attorney general