Watch Bill Schneider's report on the state of the Democratic and Republican nomination races.

(CNN) - In Monday's Race to '08 highlights, Sen. Barack Obama discusses taking care of the nation's veterans and moving away from a "style of politics" and a "political culture" that he doesn't believe is productive.  You can also watch former President Bill Clinton campaign on behalf of his wife, Sen. Hillary Clinton, and discuss the admiration he has for his wife's rivals in the Democratic presidential field.  Watch this Veterans Day edition of the Race to '08 highlights.

Bill Clinton: 'Boys have been getting tough' on Hillary

Clinton campaigned for his wife in South Carolina Monday.

WASHINGTON (CNN) - Former President Bill Clinton continued to weigh in Monday on intensified criticism of his wife, telling a South Carolina audience, "those boys have been getting tough on her."

"It's a great time to be a Democrat," the former president told students in Charleston, South Carolina. "Even though those boys have been getting tough on her lately, she can handle it."

The comments are in reference to the heat Sen. Hillary Clinton, D-New York, has taken since a Democratic presidential debate two weeks ago when she appeared to hedge on a question about drivers’ licenses for illegal immigrants.

Bill Clinton also came to his wife's defense last week, linking the current criticism of her debate performance to the "swift boat" television ad campaign aimed at then presidential candidate John Kerry in 2004 and an ad in 2002 questioning then-Sen. Max Cleland's patriotism. Sen. Barack Obama, D-Illinois, later said he was "stunned" by that comparison and Sen. Chris Dodd, D-Connecticut, called "it over the top."

Clinton has repeatedly said her rivals are teaming up against her because she is leading in polls, not because she is the lone female presidential candidate.

BEAUFORT, South Carolina (CNN) – Sen. John McCain told supporters in South Carolina on Monday that if elected president he would lead America out of its "tough times" in the same way President Ronald Reagan did in the 1980s.

"I'd remind you, and there's a few of us old geezers around here who knew what it was like the last time we lost a war," the Arizona Republican said, referring to the war in Vietnam. "We lost it not because of our courage and bravery on the battlefield. It was because they won the war in the United States."

McCain, a decorated naval aviator, was campaigning in this coastal town that boasts a significant military population, on the day the nation observed Veteran's Day as a federal holiday.

"The fact is we had a dispirited nation," said McCain, who was shot down over Hanoi during a bombing mission and held as a POW by the North Vietnamese. "And out of California came a great leader, a great man who thought America's best days were ahead of us, who said 'Tear down this wall, Mr. Gorbachev,' who said, 'America is a shining City on a Hill.'”

McCain declared - as he does at most campaign stops - that "we are winning" in Iraq. He invoked Reagan's trademark optimism and said he would refuse to let the war efforts in Iraq succumb to domestic discontent, as was the case with the war in Vietnam.

McCain spent two days campaigning at Veterans Days events in South Carolina's Lowcountry, which is heavily populated by military veterans and their families. The Arizona senator, who marched in Veteran's Day Parade in Beaufort Monday, received hearty cheers and standing ovations at each event. 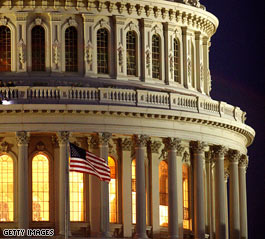 Senate Democrats are banning the sale of cigarettes on their side of Capitol Hill.

WASHINGTON (CNN) - Democrats in. Cigarettes out. Senate leaders are banning cigarette sales on their side of the Capitol, a decision that ends a little-known discount and is sparking a fire sale at Senate convenience stores.

Last week, Senate Rules Chairman Dianne Feinstein, D-California, and the ranking Republican on the committee, Sen. Bob Bennett, R-Utah, ordered that Senate convenience shops, including one in the Capitol itself, stop selling cigarettes after the first of the year.

Many Senate staffers buy cigarettes from those shops because retail goods inside the Capitol complex are sold with no sales tax. That discount is set to become an outright bargain Tuesday as various Senate shops plan to sell cigarettes at $3 a pack to get rid of inventory. Cigarettes in the District of Columbia commonly sell for more than $4 a pack.

McCain called for an end to independent advertisements Monday.

WASHINGTON (CNN) - Republican presidential hopeful John McCain renewed his call Monday for backers to "cease and desist" supporting independent advertisements intended to benefit his campaign, the kind he has railed against for years as a practice that corrupts the political process.

"If you respect me or my principles, I urge you to refrain from using my name and image in any ads or other activities," McCain said.

Meanwhile, presidential rival Mitt Romney personally went after McCain on this at a stop in Concord, New Hampshire today, saying “it is the height of irony that the author of McCain-Feingold now has his supporters raising apparently vast sums of money, well above any contribution limits that normal citizens see, to support his campaign and it's really quite unfortunate."

But the supporter McCain is singling out, GOP ad maker Rick Reed, tells CNN not only will he keep running an ad now up in South Carolina, he intends expand it to Wisconsin as soon as Tuesday.

END_OF_DOCUMENT_TOKEN_TO_BE_REPLACED

(CNN) – Sen. Hillary Clinton’s campaign admitted Friday that a staffer spoke to potential questioners prior to an event about energy policy last week in Newton, Iowa.

Now you can watch the moment for yourself as Sen. Clinton calls on Muriel Gallo-Casanoff, a Grinnell College student, who asks Clinton a question about global warming.  Then, Clinton proceeds to give a long, detailed answer about what she would do as president to combat global warming.

Clinton had to contend with falling flag poles at a press conference Monday.

WASHINGTON (CNN) - She has come under increased heat recently from her Democratic presidential rivals, but on Sunday Sen. Hillary Clinton was on the receiving end of a different kind of attack - falling flag poles.

The Democratic presidential frontrunner was wrapping up a press conference in Waterloo, Iowa when several large flag poles directly behind her started to fall down, as shown on a video posted by ABC News.

Aides came rushing to the stage as Clinton herself tried to handle the falling flags crashing around her.

"I think the bases are not weighted enough," the New York senator can be heard saying on video captured by ABC.

After a couple minutes, the flags were successfully stabilized.

But Obama still made a subtle dig apparently aimed at Clinton, one of his chief rivals for the 2008 Democratic presidential nomination .

“I’ll let Sen. Clinton answer for her campaign,” Obama told reporters. “When I go into a town hall meeting, I never know what questions to expect and that’s a good thing because the people of New Hampshire should expect that their candidates are going to hear what’s on the voters’ minds and not what’s been concocted by the candidate’s staff."

Thompson has scored a big endorsement.

The formal announcement, which will take place at 10 a.m. ET Tuesday in Washington, is a much needed boost for Thompson’s campaign, which is suffering from low poll numbers and criticism the candidate lacks enough fire in the belly to win.

Thompson came into the race late with the hope of winning over social conservatives unsatisfied with the rest of the GOP field. Although polls and anecdotal evidence suggest he’s failed to excite those conservatives, he is making a big push to play up his conservative credentials on the stump and in a TV ad - especially his anti-abortion views and voting record in the Senate.

Thompson has, however, faced criticism from some conservatives for what they see as conflicting statements, like saying last week he does not support the plank in the Republicans party platform since Ronald Reagan was president that calls for an anti-abortion constitutional amendment. Thompson said he hopes Roe v. Wade will be overturned, but that in general he believes abortion laws should be left up to the states.

The National Right To Life Committee boasts affiliates in all 50 states with over 3,000 local chapters nationwide. Although some GOP strategists say its grassroots power may not be as strong as it was in the past, it will likely mobilize some crucial support for Thompson’s campaign.