The true cost of the war on terror

WASHINGTON (CNN) - Democratic leaders in Congress released a report Tuesday where they estimated the total costs of the country's military operations in Iraq and Afghanistan.

The report estimates the total cost of the war on terror– including what Democrats call the war's "hidden costs" - at $1.6 trillion.

This is twice what President Bush has requested from Congress to fund  operations in Iraq and Afghanistan but far less than the $50 billion the Bush administration initially estimated for the Iraq war in 2003.

A pro-life boost for Thompson

WASHINGTON (CNN) - The National Right to Life Committee endorsed former Senator Fred Thompson, R-Tennesssee, in Washington, D.C. on Tuesday. Congressional Correspondent Dana Bash reports on how the endorsement may help Thompson's White House bid and what Thompson may still need to do even with the help of the prominent pro-life group.

Rep. Tancredo has released a new ad that links his fight against illegal immigration with the war on terror.

(CNN) - In this report, Correspondent Brian Todd places Rep. Tom Tancredo's, R-Colorado, new political ad in historical context with similar political ads and also takes a look at what the ad may do for Tancredo presidential campaign.

Watch Mary Snow's report on CNN's exclusive interview with the student at the center of the Clinton planted question controversy.

(CNN) - CNN Iowa Producer Chris Welch landed an exclusive interview with Muriel Gallo-Chasanoff, the Grinnell College student who asked Sen. Hillary Clinton, D-New York, a question planted by her campaign staff at an event last week in Iowa.  Mary Snow reports on why Gallo-Chasanoff chose to speak out and how the incident may impact Clinton's presidential bid.

Watch Tancredo defend his controversial ad in an interview with CNN's Wolf Blitzer .

The 30-second ad, set to begin running on Iowa cable stations this week, depicts a hooded man walking into a crowded mall with a backpack. Over the sound of a ticking clock, the man abandons the backpack at a bench, and an explosion is heard.

"There are consequences to open borders beyond the 20 million aliens who have come to take our jobs," the ad's narrator says. "Islamic terrorists now freely roam U.S. soil. Jihadists, who froth with hate, here to do as they have in London, Spain and Russia."

Edwards is out with a new ad Tuesday.

In the commercial airing in Iowa, Edwards promised to end congressional health care benefits if they fail to pass a universal health care plan within six months of his administration.

"There’s no excuse for politicians in Washington having health care when you don’t have health care," Edwards said in the ad.

But Clinton's campaign pointed out on its Web site that this proposal is unconstitutional. The Clinton campaign said it would violate the 27th amendment, which states that any law to change the compensation of members of Congress has to be approved by the House.

END_OF_DOCUMENT_TOKEN_TO_BE_REPLACED

“I am particularly pleased by her commitment to reverse the economic policies that have created a situation in which as the country progresses economically, only a small number of Americans benefit,” Frank, who chairs the House Financial Services Committee, said in a statement released by the campaign.

“Based on my work with her on issues involving discrimination, I am convinced that Hillary Clinton is the best candidate best equipped to pass laws that will treat all Americans with dignity and equality no matter who they are or who they love,” said Frank. 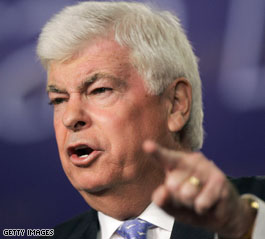 Terry Stewart, the chairman of the Dubuque County Democratic Party, hailed the Connecticut senator as "uniquely qualified to be president," and cited Dodd’s legislative successes in the Senate as the chief reason he is offering his support.

"I didn't come to this decision lightly," Stewart said in remarks circulated by Dodd's campaign. "I studied the range of Democratic candidates this entire calendar year...I looked for the edge that one candidate would have over the others. Chris Dodd rose to the top of the roster."

Romney was critical of his rivals from both parties Tuesday.

"There's a sanctuary state of mind that [New York Sen.] Hillary Clinton, and [former New York City] Mayor Giuliani, and [former Arkansas] Gov. Huckabee have," Romney said at a news conference. "They have provided - or support the idea of providing - tuition breaks to illegal aliens to institutions of higher learning, and that sanctuary state of mind flies in the face of the rule of law."

A Giuliani campaign spokeswoman fired back, and criticized Romney for his own track record on the issue of illegal immigration.

"Once again Presidential Trail Mitt Romney completely ignores the record of Governor Mitt Romney," Maria Comella, Giuliani's deputy communications, said in an email statement. "Under Governor Mitt Romney the number of illegal immigrants skyrocketed, while he recommended millions of dollars in state aid to numerous sanctuary cities and to companies employing illegal immigrants, not to mention the illegals working on his own lawn."

Thompson trails Giuliani, a former New York mayor who supports abortion rights, in the race for the Republican presidential nomination, according to most national polls.