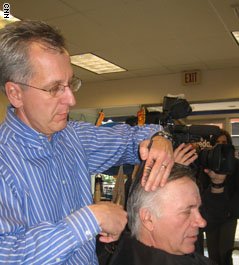 In an interview with CSPAN, the man behind President Bush's two White House wins cited a recent debate in Philadelphia when Clinton was asked why more of her records as first lady have not yet been made public.

"He missed the opportunity," Rove explained. "If he had stood there and said, 'Senator, with all due respect, it is entirely within the power of you and your husband to immediately order the release of those documents. And your failure to do so reveals legitimate questions in the minds of the American people about what you might be hiding and it's not going to be good for the Democratic party or for you if you allow those questions to persist,' it would have been a moment, it would have been a big moment."

"Instead it was a vague and wandering around, and weak, and insipid," Rove continued. "There have been a number of occasions like that where a sharp and clear and respectful contrast would have created a moment."

Rove also said the Republicans will lose in 2008 unless they "articulate a positive agenda and a positive vision."

"Otherwise," Rove said, "The American people will say, 'You know what? I have got my doubts I have got my concerns and you haven't given me the confidence that I will do better with you.'"

Edwards: I will continue to tell the truth

Edwards expressed frustration over Clinton’s apparent lighthearted reaction to a question about the North American Free Trade Agreement (NAFTA) saying, “this is not a joking matter for millions people who have lost their jobs. And NAFTA has in fact cost Americans well over a million jobs.”

When asked if he was guilty of mudslinging with regards to Senator Clinton, he responded, “What I’ve been doing is telling the truth and I will continue to tell the truth.”

Edwards told CNN that that the biggest effect of Thursday’s debate would be that it was another opportunity for him to differentiate himself from his rivals. “A lot of Americans are really just for the first time beginning to pay attention, and there’s nothing unusual about that. They have real lives. They’re not spending their lives thinking about politics. But now that they’re beginning to pay attention, our responsibility is to make sure, in my case, to make sure that they understand exactly what I want to do in a positive way as president, and how my vision differs from the other candidates.”

Bill Clinton: "They made trade a dirty word"

Clinton discussed the amounting inequalities in healthcare, education and income domestically and said the problems had been exacerbated by an increasing deficit financed by foreign monies.

"It is profoundly unequal, and the government's policies have made it more, so by insisting that wealthy people like me get a tax cut every year,"
Clinton said. "And then [they] turn around and borrow the money to pay for my tax cut, and for our soldiers in Iraq and Afghanistan, from the Chinese, the Indians, the Koreans, the oil exporters‹and all the people that have trade surpluses with us."

As a result of these investments by foreign nations, Clinton noted that trade policy had become less effective.

"They made trade a dirty word," Clinton said of the current Bush administration.

"We have mortgaged our economic sovereignty," said the former President.

What do Republicans want?

(CNN) - In this report from Las Vegas, Bill Schneider takes a look at Nevada GOP poll results as well as national polls and polling in the other early primary states.

Schneider reports on the disconnect between the national and early state polls and what role electability is playing in the race for the 2008 Republican presidential nomination.