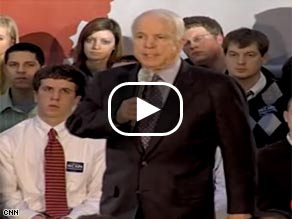 (CNN)—John McCain joined President Bush Monday in condemning Congress for its failure to renew legislation that would provide legal immunity for telecom companies that participate in warantless government wiretapping.

“[It’s] worse than embarrassing,” McCain said at a campaign event in Ohio, it’s “disgraceful” that Congress has not yet approved FISA renewal.

Opponents of the measure have said the government already possesses the necessary jurisdiction to monitor potential terrorist activity and it would provide the government with too much power.

Democratic presidential candidates Barack Obama and Hillary Clinton both oppose giving retroactive immunity for telecoms, though when the matter came up earlier this month, only Obama made it to the Senate vote. Clinton was on a campaign trip in Texas.

Despite the gridlock between the White House and Congress over the new terrorism surveillance program, the telephone companies have agreed to continue cooperation with government wiretaps for now, according to a joint statement released Saturday by U.S. Attorney General Michael Mukasey and National Intelligence Director Michael McConnell.

He added, “Should companies who are believed to have helped us after 9/11 till today, get information necessary to protect the country be sued? My answer is absolutely not, they shouldn't be sued.”