"I will do it as others have done it upon becoming the nominee or even earlier," Clinton said at Tuesday's debate.

Pressed if she would do it before the March 4 primaries, Clinton said she didn't have the time to get them together, but said, "I will certainly work toward releasing them, and we will get that done and in the public domain."

Obama released his tax returns late last year, and suggested Clinton do the same. He stepped up his criticism of the New York senator for not doing so earlier this month when it was revealed she loaned her campaign $5 million.

"I think the American people deserve to know where you get your income from," Obama said then.

Clinton: I always get the first question

Referencing a recent Saturday Night Live skit that portrayed the press as overwhelmingly in favor of Obama, Clinton also joked, "Maybe we should ask Barack if he's comfortable and needs another pillow.”

Clinton's comments echoed those of her communications director, Howard Wolfson, who on Tuesday sharply criticized the press coverage of the Democratic race.

“I think it is true that every time the Obama campaign in this campaign has attacked Sen. Clinton in the worst kind of personal ways, attacked her veracity, attacked her credibility, said that she would say or do anything to get elected, the press has largely applauded him," he said.

[cnn-photo-caption image= http://i.cdn.turner.com/cnn/2008/images/02/26/art.debate2.ap.jpg caption=" Clinton and Obama opened the debate with a sharp exchange on healthcare."](CNN) - Hillary Clinton and Barack Obama continued their ongoing spat over healthcare at Tuesday's Democratic debate, each accusing the other of distorting their respective policy stands.

"Sen. Obama has consistently said I would force people to have health care whether they can afford it or not," Clinton said.

"I dispute it and I think it is inaccurate," he said. To suggest somehow that our mailing is somehow different from the kinds of approaches that Senator Clinton has taken throughout this campaign I think is simply not accurate."

The back-and-forth was part of an 16-minute opening discussion on the issue, despite repeated attempts from the debate moderators to move to other topics. It followed a sharp exchange last the weekend over campaign literature the Obama campaign is distributing that claims Clinton would force even those who are not financially able to buy health care.

"I think it's important that you stand up for yourself and you point out these differences so that voters can have the information they need to make a decision," Clinton said of her sharp denouncement of Obama Saturday.

"Now that the race for the Republican nomination is down to just the two of us, I believe this is the time for a real discussion about our vision for the future of this great country," the letter reads. "I encourage you to join me in a Lincoln Douglas-style debate so that voters can better understand our views on critical issues."

McCain had said earlier in the day that his campaign had never heard directly from the Huckabee camp about a debate, a suggestion the former Arkansas governor has been making for weeks.

"Our Democratic counterparts, Senators Barack Obama and Hillary Clinton, have had recent opportunities to underscore the differences in their positions. It seems only fitting to me that Republican primary voters are differed the same," the letter continues.

Huckabee's future in the race hinges on the primaries in Texas and Ohio next Tuesday and Huckabee asked that the debate take place before then.

He concludes, "Senator, let's lead by example and get the ball rolling. I look forward to hearing your thoughts on this idea and debating you in front of the American people."

(CNN) - The countdown to the March 4 primaries continues as Hillary Clinton, Barack Obama, John McCain, and Mike Huckabee make their pitches to voters in Ohio, Texas, Rhode Island, and Vermont.

In the latest episode of CNN=Politics Daily, Sen. Barack Obama picks up an endorsement from former rival Sen. Christopher Dodd.  Senior Political Correspondent Candy Crowley reports on the endorsement as well as the latest from Sen. Clinton.

John McCain ended up in the awkward situation of having to distance himself from comments made by a supporter who introduced him at a campaign event Tuesday.  Chief National Correspondent John King was there and reports on the supporter's controversial comments and McCain's response.

The recent release of three new national polls shows how the Democratic nomination race has changed since voting began in Iowa at the beginning the year.  Senior Political Analyst Bill Schneider reports on the new data - viewed together as a poll of polls - and the issues driving voters' views and preferences.

Clinton on Obama call out: 'I got a little hot'

[cnn-photo-caption image= http://i.cdn.turner.com/cnn/2008/images/02/26/art.clintonhot.ap.jpg caption=" Clinton campaigned in Ohio Tuesday."](CNN) - Hillary Clinton said Tuesday she got heated over the weekend when she sharply criticized rival Barack Obama for distributing literature that she claimed misrepresented her positions on NAFTA and healthcare.

"I got a little hot over the weekend down in Cincinnati," Clinton said at a town hall event in Lorain, Ohio. "Because I don't mind having a debate. I don't mind airing our differences, but I really mind it when Sen. Obama's campaign sends you literature in the mail that is false, misleading and has been discredited.

"That is not the way to run a campaign to pick the Democratic nominee for president," she added, to applause.

On Saturday - only two days after declaring she was "honored" to share a stage at the CNN/Univision debate with Obama - Clinton angrily denounced two mailers his campaign was distributing in Ohio, one that described her as a supporter of NAFTA, and one that said she would force everyone to buy health insurance, regardless of ability to pay.

"Shame on you, Barack Obama," she said. "Enough with the speeches and the big rallies and then using tactics right out of Karl Rove's playbook. This is wrong, and every Democrat should be outraged." (Watch video: Clinton calls out Obama)

Obama denied Clinton's assertions that the claims in the campaign literature was false.

- CNN's Peter Hamby and Alex Mooney contributed to this report

Senator Byrd under observation after fall

The 90-year-old West Virginia Democrat complained about pain after going to work Tuesday, and doctors are looking for signs of broken bones or other injuries, Byrd spokesman Jesse Jacobs said.

Byrd cast a vote on the Senate floor and was back in his office working when aides recommended he see the Capitol physician, Jacobs said.

He is the Senate's longest-serving member, first elected in 1958. Though he walks with the aid of two canes, he still speaks vigorously on the Senate floor.

As the senior senator in the majority party, he also serves as the chamber's president pro tempore - third in line in presidential succession, behind Vice President Dick Cheney and House Speaker Nancy Pelosi.

His hospitalization came the same day that another of the Senate's senior members, Virginia Republican John Warner, returned to a Fairfax, Virginia hospital for observation after a recurrence of a heart condition first diagnosed in October. Warner's office said the 81-year-old senator's condition, known as atrial fibrillation, is common and doctors would monitor his heart and adjust his medication during his stay.

(CNN) - New Yorkers overwhelmingly like Mayor Michael Bloomberg, but most don't want him to run for president, according to a new poll.

Richardson: Endorsement could come 'within days' 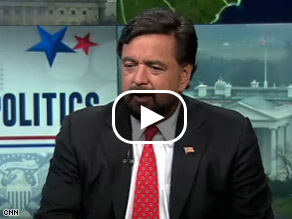 In an interview with CNN's Wolf Blitzer set to air at 6 p.m. hour of The Situation Room, Richardson praised both Hillary Clinton and Barack Obama, and suggested now might be the right time he publicly backs one of them.

"I may make a decision and do an endorsement," Richardson said.

Asked if the endorsement could come within the next couple of days, the New Mexico governor replied, "Possibly, yes."

Richardson, a former member of the Clinton administration, wouldn't hint at which candidate he was leaning towards, and said it's still possible he may make no endorsement.

"I'm just not trying to be cute. I just have felt that an endorsement by me, I don't think it is that significant," he said. "But I still might do it."

Both Clinton and Obama have heavily sought Richardson's backing since he dropped out of the race in January. Richardson, one of the highest ranking Hispanics in the Democratic Party, could give either candidate a boost in the Latino community ahead of Texas' primary on March 4. Latinos are expected to play a big role in that contest.

In the interview Tuesday, Richardson praised both candidates, and said the two are running a "classic race."

"Change versus experience," Richardson said of the race. "And obviously I ran on the experience mantle. It didn't work out too well. But I think they are both exceptional candidates, represent fundamental change. I think it is going to be very, very close. I don't think this race is over."

Watch the full interview with Richardson tonight on The Situation Room, 6 p.m. ET.

Blitzer: Clinton has a fine line to walk

[cnn-photo-caption image= http://i.l.cnn.net/cnn/2008/images/02/20/art.wolf2006.cnn.jpg caption=" Clinton has a tough task in tonight's debate. "]WASHINGTON (CNN) - There’s one week to go before the voters speak in Texas, Ohio, Vermont and Rhode Island - and a lot can happen in one week. The undecided Democratic voters still have plenty of time to study the candidates and the issues before making up their minds. And those who have made up their minds are certainly capable of changing their opinions. This will be an exciting week for all of us.

One thing I have noticed over these past several weeks is that Democrats across the country are truly energized by this campaign. They are turning out to vote in huge numbers. I suspect this will be the case in the four upcoming states.

Clinton’s supporters are passionate; so are Barack Obama’s supporters. These Democrats are also itching to start the general campaign, presumably against John McCain.

That helps explain why Hillary Clinton’s strategy in trying to win the March 4 contests is so complicated. After 11 losses in a row, she is trying to catch up. In the process, she has to walk a fine line.

A lot of Democrats say they are turned off by her tough rhetoric, especially in comparing Obama’s inexperience in foreign policy to George W. Bush’s inexperience when he took office more than seven years ago. I have heard from several of her own long-time supporters over the past 24 hours that they don’t like her slamming him and effectively providing McCain with ammunition should Obama capture the party’s nomination - they don’t want her words thrown back at Obama by McCain and his team during the general election.

Clinton is understandably trying to differentiate herself from Obama, looking to highlight differences that are important to Democratic voters out there. That is, of course, what all candidates try to do during elections. But it’s not easy to do this without turning off the Democratic base is not easy.