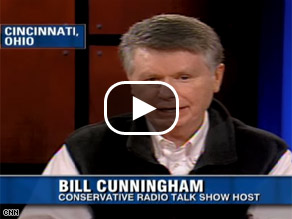 CINCINNATI, Ohio (CNN) - A conservative radio talk-show host said that "he's had it up to here" with Sen. John McCain after the GOP presidential candidate repudiated the commentator's remarks about Sens. Hillary Clinton and Barack Obama at a campaign event.

"John McCain threw me under a bus - under the 'Straight Talk Express,' " Bill Cunningham told CNN on Tuesday, referring to McCain's campaign bus.

“There's a difference between denouncing and rejecting," Clinton said. "And I think when it comes to this sort of, you know, inflammatory - I have no doubt that everything that Barack just said is absolutely sincere. But I just think, we've got to be even stronger. We cannot let anyone in any way say these things because of the implications that they have, which can be so far reaching.”

Farrakhan, the head of the Nation of Islam, recently made positive statements about Obama’s candidacy. The controversial leader has made many remarks that have been deemed anti-Semitic, including calling Judaism a "gutter religion." Asked tonight if he accepted Farrakhan's endorsement, Obama denounced those statements.

"I obviously can't censor him, but it is not support that I sought," Obama said. "And we're not doing anything, I assure you, formally or informally with Minister Farrakhan."

Pressed if he specifically rejected the endorsement, Obama said, "I can't say to somebody that he can't say that he thinks I'm a good guy" and that he didn't "see a difference between 'denouncing' and 'rejecting.'"

Responding later in the exchange directly to Clinton's comments, Obama said, "There's no formal offer of help from Minister Farrakhan that would involve me rejecting it."

"But if the word 'reject' Senator Clinton feels is stronger than the word 'denounce,' then I'm happy to concede the point, and I would reject and denounce," he added.

If you average the "poll of polls" - AP-IPSOS, USA Today/Gallup and CBS/New York Times - Obama leads Clinton 50 percent to 40 percent, with 10 percent unsure. 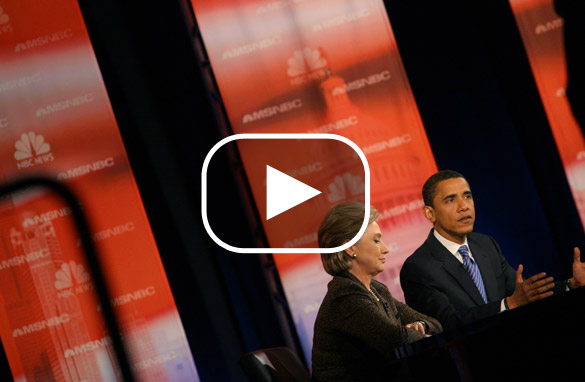 CLEVELAND, Ohio (CNN) - Ohio Sen. Sherrod Brown, an avowed economic progressive who also happens to be an uncommitted superdelegate from a very important state, said he was pleased with both candidate's answers on NAFTA during Tuesday's debate.

Both Hillary Clinton and Barack Obama were asked if, as president, they would opt out of NAFTA in six months. Both candidates said they supported restructuring NAFTA and would use the threat of opting out of the agreement as a negotiating tool.

"They said it exactly right," Brown told CNN. "I want trade and more of it. I want it under different rules."

Brown voiced loud opposition to NAFTA during his 2006 Senate campaign, in which he unseated GOP incumbent Mike DeWine.

"If we say we want a different NAFTA," Brown continued, "they will negotiate, always with the threat of opting out if they don't, and that's exactly the right position. And I was thrilled, because I have not heard either of them specifically say that and they answered the question directly."

Brown said he is not planning to endorse either Democratic candidate.

"You know, I've heard from an Army captain who was the head of a rifle platoon - supposed to have 39 men in a rifle platoon. Ended up being sent to Afghanistan with 24 because 15 of those soldiers had been sent to Iraq," Obama told CNN moderator Campbell Brown.

Washington Post: In a Crucial State, a Contentious Debate
In their final debate before critical primaries in Ohio and Texas, Sens. Barack Obama and Hillary Rodham Clinton clashed sharply on familiar ground, arguing over who has the better health-care plan, who has been right about Iraq and who would move most aggressively to rethink trade policy as president.

WSJ: Texas Two-Step Vote Could Trip Up Clinton
Opinion polls show her rival, Illinois Sen. Barack Obama, inching up to Sen. Clinton or already passing her in Texas. But it is the complicated delegate nominating system - the Texas two-step - more than popular turnout that could stymie a Clinton victory Tuesday and perhaps cost the New York senator the nomination.

Columbus Dispatch: Huckabee, McCain Keep Rivalry In Motion
The battle for the Republican presidential nomination isn't over "until Ohio says it's over," Mike Huckabee said at a rally yesterday in Columbus. And maybe not even then, the former Arkansas governor hinted later.

NY Times: Ohioans Hear Populist Pleas by Democrats
For as long as anyone in Youngstown, Ohio here can remember, presidential hopefuls have made this scrappy, blue-collar stronghold an obligatory pit stop on the Democratic stump. Franklin D. Roosevelt and John F. Kennedy breezed through when the steel plants still turned the night sky orange; decades later, after the smelters had gone cold, Bill Clinton and John Kerry came by promising jobs to those left idle by the mill closings.