LUBBOCK, Texas (CNN) – The sight of Mike Huckabee side by side with Chuck Norris in Texas on Thursday evoked memories of the campaign trail in January when the former Arkansas governor effectively used the martial arts star to get supporters revved up at rallies in Iowa, New Hampshire and South Carolina.

Gone is Huckabee's frontrunner status but Norris and wife Gina, residents of College Station, Texas, are back after a few weeks off the trail. They joined Huckabee at his second rally of the day in Waco and will stay with the campaign through Tuesday when Texas holds its primary. Whether or not it was thanks to Norris , 700 people packed the hotel ballroom while 500 more had to listen to the speech over a speaker system in the hallway.

Huckabee added to the long list of Chuck Norris “facts”, telling Waco supporters, many of them students at nearby Baylor University, “Chuck Norris doesn’t just draw a crowd, he shows up and the crowd materializes.” He added, “In my administration there would be room for a Secretary of Defense named Chuck Norris!”

Norris says he decided to support Huckabee after watching him debate and doing some online research. “Being on the campaign with [Huckabee] for the last four months, I’m really impressed with this man and I really know and believe that he is the man to lead our nation in the future. So I’ll do whatever I can to help get him elected,” said Norris before going into a fundraiser with Huckabee in Amarillo.

Standing next to the six-time karate world champion, Huckabee told reporters he needs to win Texas next week to change the course of the race. “I’m not stupid, I understand that a lot of the time the crowd comes to see Chuck. But between Chuck and me hopefully we get them to go vote Tuesday.”

Clinton will attend the funeral, to be held at 11 a.m. in the Dallas/Fort Worth area, at the request of the officer's mother.

According to the campaign, a Clinton supporter in Texas had been in touch with the local police officer's union, which had been communicating with the officer's mother, who requested Clinton's presence at the memorial.

Senior Cpl. Victor Lozada was killed last Friday after crashing into a barrier along Clinton's motorcade as it traveled through Dallas.

Texas and gas prices: It's complicated 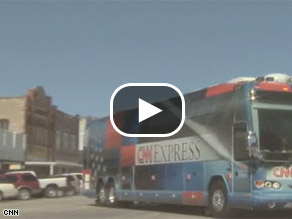 SAN ANTONIO, Texas (CNN) - Traveling around Texas this week with the CNN Election Express, we've been talking to voters and have found the state of the economy to be one of their primary concerns. High gas prices are cited by many as a major burden, and a contributing factor to the general economic slowdown.

But in Texas they produce oil, so high oil prices are an economic benefit to some of the people here.

[cnn-photo-caption image=http://i.l.cnn.net/cnn/2008/images/02/21/art.nohug0221.ap.jpg caption="Sens. Obama and Clinton greet the audience before last weeks CNN debate."]
(CNN) – Democratic presidential candidates Hillary Clinton and Barack Obama are in a tight race in Texas, according to a “poll of polls” calculated by CNN on Thursday.

An average of three polls of likely Democratic voters has Sen. Barack Obama at 48 percent and Sen. Hillary Clinton at 45 percent. Seven percent were unsure.

Texas voters will be joined by those in Ohio, Vermont and Rhode Island when they head to the polls on March 4. With Obama surging into the lead on 11 straight wins since Super Tuesday, Clinton's supporters admit that she must do well in Texas and Ohio if she is continue to battle for the nomination.

Huckabee takes a swipe at Obama

But on Thursday, the former Arkansas governor went after the Illinois senator for ideas he says would cost Americans $287 billion.

“I hear Barack Obama say that he's going to provide everybody with health care and college tuition and pave the streets with gold,” Huckabee said to laughter from the crowd, “the proposals he's put on the table so far, already are going to cost about $287 billion dollars, so far. Now that's a lot of money.”

“What we don't know how to figure out is how much will it cost us when we walk away and leave Iraq in a mess and the Middle East blows up, how much will that cost?” added Huckabee.

After spending just one day campaigning in Ohio and Rhode Island each, Huckabee began a swing through Texas on Thursday that will end with the state’s Tuesday primary. Of the states holding their primaries on March 4, Huckabee is doing the best in Texas, though a CNN/Opinion Research poll has him trailing McCain by 25 percentage points.

In true Huckabee fashion, he laced his last jab at Obama with humor. “If we were doing the Mastercard commercial we'd simply say we know what some of the costs are. Some of the items on his agenda? Priceless.”

Clinton weighs in on Bloomberg's non-bid

At a press conference in Ohio, she weighed in on Bloomberg's decision, which he made public in Thursday's edition of the New York Times.

"I have the highest regard for mayor Bloomberg," Clinton said when asked about his decision. "I have worked with him on many issues affecting New York. This is such a personal decision as I can attest to. There are lots of reasons why people decide either to run or not to run, and I respect his reaching his own decision."

Clinton said she looked forward to working with Bloomberg for the "next couple of years."

The government accuses Renzi of using his official position in Congress to enrich himself and a former business partner.

Rep. Renzi did not have an immediate comment on the Ethics Committee announcement.

His lawyers released a statement last week saying, “Congressman Renzi did nothing wrong. We will fight these charges until he is vindicated and his family’s name is restored.”

Renzi has insisted he will not resign from Congress.

Legal Fees mount for the prosecution of Senator Craig

WASHINGTON (CNN) - The Metropolitan Airport Commission has spent over 28,000 dollars on the prosecution and appeal of Idaho Senator Larry Craig, MAC spokesman Patrick Hogan told CNN in a phone interview.

Hogan said that the legal fees spent on Sen. Craig's case account for 20 percent of the 2007 budget used to prosecute cases at the airport. "This is one of the highest amounts of money ever spent on prosecuting a misdemeanor," Hogan added.

The MAC gets ist funds from airlines, parking and other airport concessions. It oversees the Minneapolis-St. Paul, Minnesota airport where Craig was arrested in June.

Craig, 62, was arrested by an undercover officer in a public restroom at Minneapolis-St. Paul International Airport.

He pleaded guilty in August to a misdemeanor charge of disorderly conduct. A soliciting charge was dropped.

Craig has since denied the charges - saying he was not soliciting sex in the bathroom and is not gay. He has since appealed a state courts decision not to let him change his guilty plea. A Minnesota appellate court has not made a ruling to date.

Blitzer: Would U.S. be better off if it met with adversaries?

[cnn-photo-caption image= http://i.l.cnn.net/cnn/2008/images/02/20/art.wolf2006.cnn.jpg caption="Is it a good idea for a president to meet directly with adversaries?"]WASHINGTON (CNN) - Barack Obama has been receiving some serious criticism on three fronts for his stated willingness to meet directly as president with the likes of Iran’s President Mahmoud Ahmadinejad. Hillary Clinton has been quite critical as has John McCain. And now President Bush has weighed in as well - insisting it’s a bad idea.

Their bottom line is that these kinds of high-level meetings require lots of advance work. They say in effect that a president should not give aid and comfort to a tyrant who is abusing his own people. Such a meeting with the president of the United States, they add, would be used by a tyrant for propaganda purposes to further oppress his people.

“The Bush Administration’s approach has been to say, unless they agree with everything we say ahead of time, we won’t meet,” Obama told me the last time we spoke. “That is a doomed policy. "The National Intelligence Estimate, our 16 top intelligence organizations, have themselves indicated that the Iranian leadership responds to both carrots and sticks and that we should be engaging in direct talks. That’s the kind of leadership I want to show as president of the United States.”

This is a serious area of disagreement. So who is right in this debate? Would the U.S. and the world be better off if an American president were to sit down publicly without preconditions with Ahmadinejad, Cuba’s Raul Castro, North Korea’s Kim Jung Il, or Venezuela’s Hugo Chavez?

Would that help make for a more stable and peaceful world or would it simply embolden U.S. adversaries? I would be interested to know what you think.

Barack Obama spokesman Bill Burton meanwhile indicated Obama's total for the same period will be considerably higher than that, the AP reported.

In January, Clinton raised nearly $14 million, compared to Obama's $36 million. Earlier this month, the New York senator revealed she loaned her campaign $5 million in an effort to stay competitive with Obama heading into the February 5 round of primaries.