Clinton tested in Texas, where it all began in '72

[cnn-photo-caption image= http://i.l.cnn.net/cnn/2008/POLITICS/02/29/texas.clinton.memories/art.clintons.jpg caption=" Hillary and Bill Clinton worked on George McGovern's 1972 campaign in Texas before they wed in 1975. "]AUSTIN, Texas (CNN) - Garry Mauro will never forget that night in 1972 when he says Bill Clinton and Hillary Rodham ignored the post-election party surrounding them, instead preferring to huddle in a corner and talk about changing the future.

The young then-unmarried couple, attending Yale Law, weren't interested in letting off steam with their Democratic colleagues in Austin, Texas, according to Mauro, who's now a strategist with Sen. Hillary Clinton's presidential campaign.

The three were among a group of Young Turk Democrats working that summer to register voters in Texas. The Clintons had just started dating, said Mauro, who years later became Texas land commissioner. "They obviously had a lot of respect for each other, and they would spend hours talking to each other."

(CNN) - Hillary Clinton Thursday jabbed at Sen. Barack Obama for being a first term senator and called her rival for the Democratic presidential nomination a "blank screen."

In an interview on ABC's Nightline Thursday night, Clinton dismissed notion's Barack Obama voters are uninformed, but said the Democratic presidential front-runner aptly described himself in his 2006 book, "The Audacity of Hope."

"I think the best description, actually, is in Barack's own book, the last book he wrote, 'Audacity of Hope,' where he said that he's a blank screen," she said in the interview. "And people of widely differing views project what they want to believe onto him. And then he went on to say, 'I am bound to disappoint some, if not all of them.'"

"He was in the state Senate, what, three years ago, four years ago?" Clinton said in continued jabs. "It's hard to know exactly what his positions are because they have changed rather rapidly in that four-year period. But there is something very appealing, and people have a right to vote for whomever they want."

The comments came a day before the Clinton campaign launched a tough new ad in Texas that aims to portray Clinton as considerably more prepared to handle a foreign policy crises than Obama. Over scenes of sleeping children, the ads narrator asks, "Who do you want answering the phone the phone?" at 3 in the morning.

Obama Campaign Manager David Plouffe forcefully responded to that ad in a conference call with reporters Friday morning."We don't think the ads are going to be effective at all, because Senator Clinton has already had her red phone moment. It was a decision whether to allow George Bush to invade Iraq, and she answered affirmatively," Plouffe said.

That compares to the $35 million the Clinton campaign has reported raising in the same time period. Obama's campaign has not said how much it raised in February, but has indicated it is significantly more than Clinton's total.

Karen E. Emory, a U.S. Capitol Police officer, must resign by March 4, get a year of professional counseling, and avoid any other criminal activity over the next 12 months.

She was indicted for destroying government property after investigators and prosecutors suspected she was behind at least two fires in women's restrooms in the buildings. None of the fires caused injury or substantial damage, and restitution is listed at $215 dollars, payable within 90 days.

[cnn-photo-caption image= http://i.cdn.turner.com/cnn/2008/images/02/29/art.obamaex.ap.jpg caption=" The Clinton campaign says Obama needs to win big on March 4, or else he has a problem. "](CNN) - Seeking to raise the expectations for its rival, Sen. Hillary Clinton's campaign said Friday that Sen. Barack Obama needs to sweep the March 4 primaries.

The Illinois senator should win all four states - Ohio, Texas, Rhode Island and Vermont - decisively, given the amount of money and resources he has devoted to them, the Clinton campaign said in a memo circulated to reporters.

"If he fails to garner big wins, there's a problem," the memo states.

"The Obama campaign and its allies are outspending us two to one in paid media and have sent more staff into the March 4 states. In fact, when all is totaled, Senator Obama and his allies have outspent Senator Clinton by a margin of $18.4 million to $9.2 million on advertising in the four states that are voting next Tuesday."

The memo came out moments after Obama campaign manager David Plouffe finished a conference call with reporters, during which he said the New York senator needs big victories in Texas and Ohio Tuesday if she hopes to chip away at Obama's now 153 pledged delegate lead - according to CNN's latest estimate.

"The Clinton campaign needs to begin wining big states by big margins to have any hope of eliminating this delegate lead they are facing," he said. 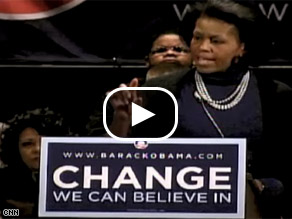 (CNN) - Michelle Obama came to her husband’s defense Thursday, saying those who criticize him because of his middle name are playing on the public's fear.

“[Critics] said he was too black,” Michelle Obama told a group of supporters in Ohio. “Then they said he wasn’t black enough. [Then] when all else fails be afraid of his name and what that could stand for because it's different.”

[cnn-photo-caption image= http://i.cdn.turner.com/cnn/2008/images/02/29/art.clintonad.cnn.jpg caption=" Clinton launched a tough new ad Friday."](CNN) - The Democratic White House hopefuls took to the airwaves Friday to battle over national security credentials, with Hillary Clinton’s campaign releasing a tough new ad that pegged her as the presidential candidate best-prepared to take on foreign crises, and Barack Obama’s team responding with the re-release of a spot that painted him as the White House hopeful with the best judgment to be commander-in-chief.

“It’s 3 a.m. and your children are safe and asleep. But there’s a phone in the White House, and it’s ringing. Something’s happened in the world,” says the announcer in the 30-second Clinton spot, which is set begin running in Texas Friday. A phone rings insistently over images of sleeping children.

“Your vote will decide who answers the call. Whether it’s someone who already knows the world’s leaders, knows the military. Someone tested and ready to lead in a dangerous world.

“It’s 3 a.m. and your children are safe and asleep. Who do you want answering the phone?”

The Clinton campaign said the new ad - titled “Children” - is meant to make voters ponder “who they want in the White House during a crisis.”

Within roughly an hour of the ad’s debut, the Obama campaign announced that it was re-releasing “Gulf,” a 30-second spot that first ran prior to the Iowa caucuses. The ad features retired Air Force Gen. Merrill McPeak, a former combat pilot who was the service’s highest-ranking uniformed officer during the first Gulf War.

“As a combat pilot and Air Force chief during Desert Storm, lives depended on the judgments I made,” McPeak says in the spot. “And judgment is what we need from our next commander in chief. Barack Obama opposed this war in Iraq from the start, showing insight and courage others did not.”

"I woke up at 4 in the morning and walked around the neighborhood. Part of my mind was just torn with anger. I wanted to go to Iraq and find those people who had done this and kill them," he said.

Two and a half years have passed since the knock on Dyer's door. The Marine flag still flies outside his suburban Cincinnati, Ohio, home, the Gold Star banner in the window a reminder of the message delivered by two Marines that August day.

[cnn-photo-caption image= http://i.cdn.turner.com/cnn/2008/images/02/28/art.bushobama.ap.jpg caption=" Bush criticized Obama Thursday for his comments at a recent debate."] (CNN) - President Bush is often reluctant to talk about the presidential race, but he couldn't resist weighing in on Democratic candidate Barack Obama's remark this week about Al Qaeda camps in Iraq.

"That's an interesting comment," Bush said at press conference Thursday. "'If al Qaeda is securing an al Qaeda base - then yes?' Well, that's exactly what they've been trying to do for the past four years.... That's one of the challenges we face, is denying al Qaeda a safe haven anywhere."

The comments are in reference to an answer Obama gave at Thursday's Democratic debate, when he said he would redeploy troops to Iraq if al Qaeda was successful in establishing bases there after the U.S. withdrew.

"I believe Senator Obama better stay focused on his campaign with Senator Clinton, neither of whom has secured their party's nomination yet," Bush added.

Bush's remarks echo those of GOP candidate John McCain, who on the campaign trail Wednesday sharply criticized Obama for his comments at the debate, and suggested the Democratic presidential frontrunner wasn't aware members of Al Qaeda are already in the country.

"I have news for Senator Obama, al Qaeda is in Iraq and that's why we're fighting in Iraq," McCain said Wednesday while campaigning in Texas. McCain's press office also released a statement Wednesday stating, "Is Sen. Obama unaware that al Qaeda is still present in Iraq, that our forces are successfully fighting them every day, and that his Iraq policy of withdrawal would embolden al Qaeda and weaken our security?"

Obama sharply rebuked those comments, saying at a campaign rally Wednesday, "Well first of all, I do know that al Qaeda is in Iraq. That's why I've said we should continue to strike al Qaeda targets. But I have some news for John McCain, and that is that there was no such thing as al Qaeda in Iraq until George Bush and John McCain decided to invade Iraq."

Obama issued a sharp response to the president and John McCain, saying both have "called for staying the course with an endless war in Iraq and a failed policy of not talking to leaders we don’t like."

"Americans of all political persuasions are calling for change," he said. "The American people aren’t looking for tough talk about fighting for 100 years in Iraq, because they know we need to end this war, finish the job in Afghanistan, and take the fight to al Qaeda."

Washington Post: Bush Assails Democratic Candidates' Foreign Policy Views
President Bush has tried, with varying degrees of success, to avoid playing the role of "pundit in chief" on daily campaign developments. But yesterday he weighed in on some of the foreign policy issues that have cropped up recently on the trail, criticizing the Democratic presidential contenders for their positions on Iraq and trade and, in the case of Sen. Barack Obama (Ill.), for his willingness to meet with U.S. adversaries.

Washington Post: Democrats Blaze Trails In February Fundraising
Sens. Hillary Rodham Clinton and Barack Obama continued to rewrite fundraising records this month, with Clinton announcing yesterday that she had rebounded from a disappointing showing in January to raise $35 million in February, by far her biggest one-month total of the campaign. Obama (Ill.), who raised $36 million in January, has not yet announced a total for February, but aides said it will be "considerably more" than that raised by his rival for the Democratic nomination.

NY Times: Nader’s No. 2
The 2008 campaign has its first official vice-presidential candidate, and it is not Mike Huckabee. The candidate, in a selection that will please fans of both his politics and his art, is Matt Gonzalez, aspiring collage artist and former president of the San Francisco Board of Supervisors. Ralph Nader, who on Sunday announced his fourth formal campaign for the presidency, as an independent, introduced Mr. Gonzalez as his running mate at a Washington news conference Thursday.