Now, this Saturday, the Illinois senator took that same stage and couldn't resist bringing up her comments, now immortalized on Web sites like YouTube.

"I think she was here, right?" Obama said toward the end of his stump speech. "She was saying 'Oh, you know, he thinks that the clouds will part and… [that] he's so naïve.'"

The room quickly erupted in "boos."

"He thinks he can wave a magic wand," he continued, mocking Clinton's impression, "and suddenly everything will be great."

Obama then went in to his standard stump lines, saying it's true he "talks about hope a lot." He then defended his rationale in doing so.

A spokesman for Saturday Night Live would not confirm the appearance, saying only, “It's a live show, anything can happen”

Clinton did not arrive for a campaign charter flight from Dallas to Columbus, Ohio Saturday evening. The campaign would not say where she was.

“Now, you know, as President Bush is leavin’ and comin’ home, waiting in that Oval Office are gonna be a lot of problems,” Clinton told the crowd. “So, the next president is gonna have to get in there and clean house,” she added.

“Now, I think we need somebody whose got some experience cleaning house to go into the White House,” she said to cheers. “So, I might ask you to grab your brooms and your mops, your vacuum cleaners and come on up and help me out,” Clinton said to an audience that included men but was majority female.

Clinton, who has suffered a string of losses to rival Barack Obama since Super Tuesday nearly a month ago, faces a crucial test of her candidacy in the upcoming March 4 primaries in Texas and three other states. Although Obama has made progress winning over female voters since Super Tuesday, the two Democratic contenders won the votes of women in nearly equal numbers during Wisconsin’s recent Democratic primary.

Related video: Watch Clinton on cleaning up the White House

Related: Analysis: Obama continues to chip away at Clinton's base

Bush votes in Texas primary but won't say for whom

[cnn-photo-caption image= http://i.a.cnn.net/cnn/2008/images/03/01/art.bush0301.ap.jpg caption="President Bush and the Danish Prime Minister speak to the press Saturday."]
CRAWFORD, Texas (CNN) - President Bush keeps saying he doesn't want to wade into the 2008 presidential election, but he proved again on Saturday that he just can't seem to resist putting at least a toe in the water.

Last week, the President took a couple of pokes at Sen. Barack Obama (D-Illinois) for suggesting al-Qaeda is not in Iraq ("I believe Senator Obama better stay focused on his campaign with Senator Clinton, neither of whom has secured their party's ... nomination yet") and for saying it's okay for a commander-in-chief to meet with the leaders of Iran or Cuba ("sitting down at the table, having your picture taken with a tyrant such as Raul Castro, for example, lends the status of the office and the status of our country to him").

On Saturday, a Danish reporter tried to get the President to engage again. At a joint press conference with Danish Prime Minister Anders Fogh Rasmussen here on his Texas ranch, Bush was asked to name the parts of his foreign policy he sees most threatened by the leading Democratic presidential candidates.

"It's a very clever attempt by you to drag me into the middle of the 2008 campaign, similar to what these two fine folks - three fine folks have been doing," Bush said as he gazed over me and two of my American colleagues.

Then, of course, Bush decided to weigh in ever so slightly. "But I will tell you this: The issue in America is going to be, who will keep taxes low, and who will be tough in protecting America," he said. "And our candidate for President is going to win because he will have convinced the American people to this truth."

Bush later revealed he's already voted by mail in Tuesday's Texas primary, where there is early voting, though he did keep one secret: "I'm not telling you who."

[cnn-photo-caption image= http://i.a.cnn.net/cnn/2008/images/03/01/art.huck0301.gi.jpg caption="Huckabee is campaigning in Texas prior to the state's March 4 primary."]
LAREDO, Texas (CNN) – Saturday morning, Mike Huckabee took a trip to the border he talks about securing at every campaign stop.

Standing on the Northern bank of the Rio Grande in Laredo, Texas, Huckabee looked across to Mexico as a Border Patrol officer briefed him on the efforts being undertaken to stop illegal immigration.

Huckabee, a strong proponent of building a fence along the Southern border, told reporters that it was not about keeping people out, but keeping bad people out. He gave examples of drug and human traffickers as well as terrorists.

As the former Arkansas governor tries to drum up support among conservatives just days before the Texas primary, illegal immigration is one of the issues Huckabee has repeatedly used to differentiate himself from frontrunner John McCain.

He almost never mentions McCain by name but in Lubbock on Friday, Huckabee said he’s the only candidate who believes the borders should be secured, as opposed to “wholesale amnesty.”

Asked Saturday if McCain’s position on immigration was too soft, Huckabee refused to answer, “I’m not going to characterize his position because I think that’s not really a healthy thing for me to get into.”

Instead, he reiterated that a border fence favors immigrants who have waited patiently for their legal status and helps fight the “assumption that everyone who is here with some Hispanic background is here illegally. That’s wrong, and that should never happen in the United States of America.”

Clinton to appear on 'The Daily Show'

[cnn-photo-caption image= http://i.l.cnn.net/cnn/2008/images/03/01/art.hrcjs0301.gi.jpg caption=" Clinton last appeared on Stewart's show in 2003."]
(CNN) – Sen. Hillary Clinton is scheduled to appear on Comedy Central’s ‘The Daily Show’ on Monday, March 3, according to a press release by the cable outlet.

Clinton has previously appeared on the political talk show but her upcoming appearance will be the first since announcing her run for the White House in 2007.

The scheduled appearance comes a day before crucial primaries in Ohio, Texas, Rhode Island, and Vermont where some pundits believe Clinton must do well in order to keep herself in the race for the Democratic nomination.

Sens. Barack Obama and John McCain, the two other leading contenders for the White House, have both appeared on the popular show since the presidential campaign started in early 2007.

SAN ANTONIO, Texas (CNN) – Former HUD secretary and Hillary Clinton supporter Henry Cisneros excoriated Texas’ arcane electoral process as “a great burden on voters” and said that losing the delegate count on Tuesday because of the state caucuses would be “exceedingly unfair.”

Cisneros was speaking to a group of Clinton volunteers who had gathered on Saturday morning at Fox Tech High School to train for Tuesday evening’s state caucuses, which follow a day of primary voting. One-third of the state’s pledged delegates are allocated through the caucuses, while the rest are determined by the day's primary vote.

Clinton herself rallied the troops after Cisneros, formerly a mayor of San Antonio, spoke.

“This is not the ideal way,” he told an audience made up of Clinton volunteers from 20 or so area counties. “Ideally it would just be a straight out vote, and that would determine who gets the delegates, but they created this intricate system in Texas, which frankly is a great burden on voters.”

Cisneros said a scenario in which Clinton wins the primary vote, but loses the evening caucuses, would be “exceedingly unfair” and warned against being “outpowered” by Barack Obama precinct teams, who have overwhelmed their Clinton counterparts in earlier caucus-based contests, outcomes he described as “tragic.”

As volunteers leafed through instructions on recruiting 25-member precinct teams, Cisneros told them, “we cannot throw away our hard work and our win by not being there at the caucuses.”

Arcade Fire to perform for Obama in Ohio

(CNN) – Add a few more stars to the long list of celebrities lining up behind Barack Obama.

The celebrated indie rock group Arcade Fire will perform two concerts for Obama in Ohio on Sunday and Monday in advance of the state’s crucial primary contest, CNN has learned. They’re set to perform at an Obama rally on Sunday in Nelsonville, southeast of Columbus, and again on Monday in Cleveland.

The Montreal-based group consists mostly of Canadians, but is fronted by Texas native Win Butler, who initially reached out to the campaign to organize the gig.

Butler made his support for Obama public in January after the New Hampshire primary, when he blogged a pointed, if somewhat profane, critique of Clinton's victory speech on the band's web site.

According to the music web site pitchforkmedia.com, the Arcade Fire frontman isn't the only high-profile indie celeb to endorse Obama: Jeff Tweedy of Wilco and Conor Oberst, a.k.a Bright Eyes, have also jumped on the Illinois senator's bandwagon.

Scenes from the trail: Obama in Texas 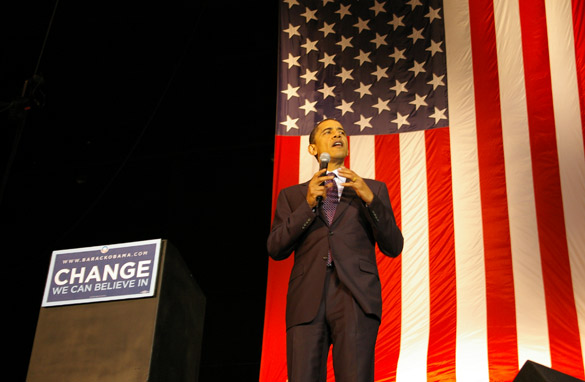