(CNN) - Fresh off defeats in Ohio, Texas, and Rhode Island, Barack Obama signaled Wednesday he will be more aggressive in targeting Hillary Clinton's claim she is the more experienced candidate.

"I think that this week she made a series of arguments about why she would be a superior candidate," he told reporters in San Antonio. "She made the experience argument that she’s been making repeatedly, particularly around foreign policy and her ability to handle a crisis."

Clinton sharply questioned Obama's readiness to be president in the closing days before Tuesday's primaries, repeatedly asserting on the campaign trail his candidacy is based solely on his initial opposition to the Iraq war. She also launched a tough ad in Texas that suggested the Illinois senator isn't equipped to handle a foreign policy crisis. Exit polls in both Texas and Ohio showed voters overwhelmingly gave the nod to Clinton when asked which candidate is better prepared to be commander-in-chief.

"One of the things that I hope people start asking is what exactly is this foreign experience that shes claiming?" Obama added. "I know she talks about visiting 80 countries. Its not clear...was she negotiating treaties or agreements or was she handling crises during this period of time? My sense is the answer is 'no.'"

"I have not seen any evidence that she is better equipped to handle a crisis. If the only criteria is longevity in Washington then she's certainly not going to beat John McCain on that."

- CNN's Chris Welch and Alexander Mooney contributed to this report 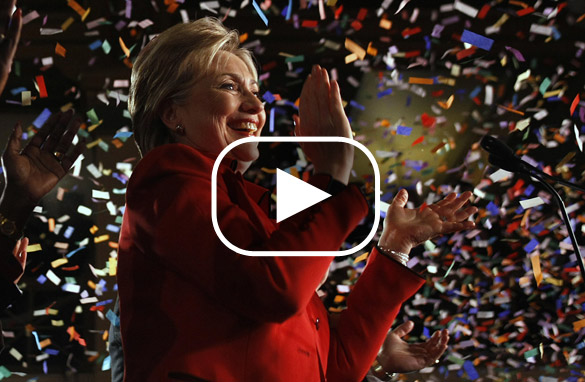 (CNN) - Sen. Hillary Clinton got her campaign back on track with projected wins in the Texas, Ohio and Rhode Island primaries.

Delegate-rich Texas and Ohio were considered must-wins for her campaign.

[cnn-photo-caption image= http://i.cdn.turner.com/cnn/2008/images/03/05/art.huckplane.cnn.jpg caption=" Huckabee reflected on his presidential bid after dropping out Tuesday night."]LITTLE ROCK, Arkansas (CNN) – A smiling and upbeat Mike Huckabee huddled with his traveling press corps one last time on the flight home to Little Rock following his exit from the 2008 presidential race.

“Clearly, things didn't go our way tonight and we had hoped they would, but when the inevitable is staring you in the face, you accept it,” Huckabee told reporters.

He had long said he would stay in the race until someone got the 1,191 delegates needed to clinch the nomination. When it became clear tonight that McCain would, the former Arkansas governor decided it was time to bow out.

“Ohio and the other states weren't close,” said Huckabee, “it was pretty obvious, I'd been through a lot of elections before. I know when one is on its way to being close and when one isn't. This one wasn't.”

END_OF_DOCUMENT_TOKEN_TO_BE_REPLACED

(CNN) - Clinton's Texas win can be attributed to some of the same factors that led her to prevail in Ohio: Overwhelming support from seniors, voters worried about their financial status, and late deciders. Her big margins among these blocs were key in tilting the state to her favor.

The big margins in those categories were hard for Obama to make up elsewhere.

Clinton was also buoyed by Latino voters in Texas– that group went for her over Obama by roughly 35 points, and constituted about a third of the electorate.

Washington Post: Clinton Takes Wins in Three of Four Primaries
Sen. Hillary Rodham Clinton won critically important victories in Ohio and Texas last night, defying predictions of an imminent end to her presidential candidacy and extending the remarkable contest for the Democratic nomination to Pennsylvania's April primary and perhaps well into the summer.

NY Times: Huckabee Cites Personal Victories in Conceding the Race to McCain
Mike Huckabee, the bass-playing Baptist preacher and former governor of Arkansas, dropped out of the race for the Republican presidential nomination on Tuesday night and endorsed Senator John McCain as the party’s candidate in November.

USA Today: Obama Says Contest Makes Him Stronger
On his way here for another election night vigil, Barack Obama said he's ready to fight for votes in Wyoming and Mississippi and relishes the prospect of a campaign that will "just make us stronger."

NY Times: Ballot Shortages Plague Ohio Election Amid Unusually Heavy Primary Turnout
A federal judge in Ohio granted a request late Tuesday from Senator Barack Obama’s campaign to extend the voting hours in 21 precincts in Cleveland by an extra 90 minutes because of a lack of paper ballots.

END_OF_DOCUMENT_TOKEN_TO_BE_REPLACED

CNN is not ready to project a winner in the Texas caucuses.

[cnn-photo-caption image= http://i.cdn.turner.com/cnn/2008/images/03/05/art.obamatexas.ap.jpg caption="Obama has so far split Tuesday's contests with Clinton."] SAN ANTONIO, Texas (CNN) - Sen. Barack Obama congratulated rival Sen. Hillary Clinton for her wins in Rhode and Island Ohio, but claimed that the path to the Democratic presidential nomination was still clear for his
campaign.

The Illinois senator and his colleague from New York were mired in a neck-and-neck battled in the Texas primary. Earlier, Obama easily won the Vermont primary.

"We know this: No matter what happens tonight, we have nearly the same delegate lead as we had this morning, and we are on our way to winning this nomination," he said.

Seniors:
Clinton's backbone of support came through: She beat Obama big (73-24) among voters 65 and over. Obama won by a similar margin among 18-24 year olds, but those voters only made up 7 percent of the voters while seniors made up 14 percent.

Economic worries:
Roughly 80 percent of voters said they were worried about their financial situation and Clinton carried this group by 5 points. It appears her aggressive standing on NAFTA and her pledges to revive Ohio's economy may have paid off. Roughly 70 percent of Ohio voters also said Clinton has a clear plan to fix the country's problems, while 57 percent said the same for Obama.

NEW YORK (CNN) – Barack Obama was looking to score major victories Tuesday in Ohio and Texas - wins he hoped would put Hillary Clinton away, and provide him with a clear path to the Democratic presidential nomination. But long before polls closed in either state, his campaign was laying the groundwork for contests in states to come.

It was a smart precaution: the New York senator has won the Ohio and Rhode Island primaries, assuring that the race for the Democratic presidential nomination would go on. As of 11:45 p.m. ET, CNN had not projected a winner in Texas. Earlier in the evening, Obama won the Vermont primary.

Anticipating the race would continue, the Illinois senator opened campaign offices in Mississippi last week, and began an advertising effort to try and woo the state’s voters. He has already aired more than 80 television ads in the state, which will hold its own primary next week. Compared to the pricey media markets in Ohio and Texas, Mississippi has been a relative bargain: Obama has only had to spend $23,000 on ads that have appeared in four different markets across the state, according to TNS Media Intelligence/Campaign Media Analysis Group, CNN’s consultant on political television advertising spending.

Next stop for Obama and Clinton is Wyoming on Saturday, where 12 delegates are on the line. Neither candidate has bought television time to try and influence Democratic voters who will attend that state’s caucuses, though Obama is scheduled to campaign there later this week. Mississippi’s primary, with 33 delegates at stake, follows on March 11.