(CNN) - Rolling Stone has been endorsing candidates for president for 36 years, but never have they endorsed one during the primary season. Until now.

The magazine endorses Barack Obama for president in its upcoming issue, which hits newsstands on Friday. The cover features the Illinois senator, and the headline “Barack Obama: A New Hope.”

“Politicians with gifts like Obama's are so rare that it's imperative for each of us to do our part," Rolling Stone editors write.

The publication first endorsed a candidate for president in 1972 when they picked George McGovern, a democrat. Since then, the magazine has endorsed candidates Jimmy Carter, Bill Clinton, Al Gore and John Kerry.

Wenner has criticized the way Hillary Clinton has run her campaign, but referred to her a “capable and personable senator.” The publisher contributed $2,000 to The New York senator’s first senatorial campaign in June 2000, but has not contributed to her current presidential bid. 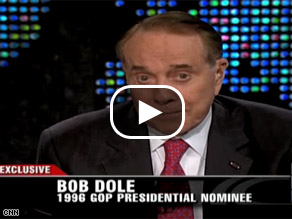 [cnn-photo-caption image= http://i.cdn.turner.com/cnn/2008/images/03/06/art.clintonbill.ap.jpg caption="Bill Clinton is heading to Wyoming."] (CNN) - Wyoming – the home state of Vice President Dick Cheney – is not usually a pit stop on the Democratic presidential campaign trail. But late this week, the state finds itself the Democratic destination of choice, with visits from former President Bill Clinton and the two remaining White House hopefuls, Hillary Clinton and Barack Obama.

The former president, campaigning for his wife, is making several stops in the state Thursday. And Hillary Clinton and Obama head to the state Friday – with both planning a stop in Casper (population: roughly 50,000).

“Seriously, I never imagined when I took this job that we would see the day when the two front-runners for the Democratic presidential nomination would hold events in Wyoming on the eve of our county caucuses,” Wyoming Democratic Party spokesman Bill Luckett wrote on the state party’s Web site Thursday. “I think there’s a reasonable chance we’ll get our 15 minutes in the national spotlight when the deal goes down on Saturday.”

With just over 600 delegates left at stake in the Democratic presidential race, every remaining contest is seen as crucial to both Clinton and Obama. No polling has been conducted in the state, though the Illinois senator has held the advantage in most caucus contests to date.

[cnn-photo-caption image= http://i.l.cnn.net/cnn/2008/POLITICS/03/06/florida.michigan/art.granholm.2006.gi.jpg caption=" Michigan's Democratic Gov. Jennifer Granholm, shown in 2006, called for her state's delegates to be seated."]MIAMI, Florida (CNN) - Will the recount state become the re-primary state? And will voters in Michigan have their say in picking a Democratic candidate for president?

Political leaders from Florida and Michigan were busy Wednesday talking about plans to make sure that voters in their states are heard in picking a Democratic nominee.

The discussions unfolded amid a grueling, delegate-by-delegate fight between Sen. Hillary Clinton of New York and Sen. Barack Obama of Illinois.

[cnn-photo-caption image= http://i.l.cnn.net/cnn/2008/POLITICS/03/04/march.4.dems/art.clinton.ohio2.gi.jpg caption=" The Obama campaign is taking aim at Clinton over her tax returns."]
(CNN) - Barack Obama's campaign took fresh aim at Hillary Clinton Wednesday for refusing to release her tax returns, asking in a memo circulated to reporters, "What does Clinton have to hide?"

"In the face of her unwillingness to release her tax returns, Hillary Clinton has made the false case in this campaign that she is more electable because she has been fully vetted," the memo stated. "When it comes to her personal finances, Senator Clinton’s refusal to release her taxes returns denies the media and the American people the opportunity to even begin that process."

David Axelrod, the Obama campaign's chief strategist, also said in a conference call with reporters Wednesday that Clinton has a history of non-disclosure and is the least-vetted candidate in the presidential race.

Clinton had said she will only release her tax returns if she captures the Democratic nomination, though her communications director, Howard Wolfson, issued a statement Wednesday indicating she would do so around April 15.

"Over 20 years of the Clintons' tax returns are in the public domain," he said. "Their tax returns since they left the White House will be made available on or around April 15. This information will be in addition to 15 years of uninterrupted public financial disclosure reports."

Obama, who released his 2006 tax returns last April, stepped up his pressure on Clinton to release her documents early last month after it was revealed the New York senator loaned her campaign $5 million.

"I think the American people deserve to know where you get your income from," he said. "I've disclosed my income tax returns. I think we set the bar in terms of transparency and disclosure that has been a consistent theme of my campaign and my career in politics.”

The New York senator did file a Senate disclosure form last May that revealed the Clinton's income for the previous year was upwards of $12 million. But, according to the Wall Street Journal, a tax return would present a more comprehensive account of the Clinton's income, and include revenue sources that aren't required on Senate disclosure forms.

"Though her campaign has tried to kick the issue down the road, Democratic voters deserve to know, right now, why it is she is hiding the information in her tax returns from last year," the Obama memo stated. "The Clinton campaign has said that they have released copious amounts of financial information but there are many questions about their private dealings that could be answered in their tax returns but not in the information that is currently available.

WSJ: Bush's Embrace Poses Dilemma as Help Poses Both Boon and Bane to Campaign
President Bush embraced one-time rival Sen. John McCain yesterday with a White House lunch and Rose Garden endorsement, but Mr. McCain now must weigh both the benefits and risks of his support.

USA Today: It's Now A Marathon, With Pa. The Big Prize
Pennsylvania is the new New Hampshire. Forget the frenzied cross-country campaign blitzes before Super Tuesday, or even the Ohio-Texas shuttle of the past month. For the next seven weeks, with brief breaks to visit Wyoming and Mississippi, Democratic presidential candidates Barack Obama and Hillary Rodham Clinton will be focusing on one state: Pennsylvania.

LA Times: Democrats Fear An Ugly End To Race
Leading Democrats scrambled Wednesday to prevent the closest, most riveting presidential contest in decades from tearing the party apart, as the odds rose that neither Hillary Rodham Clinton nor Barack Obama could clinch the nomination without angering large blocs of voters.