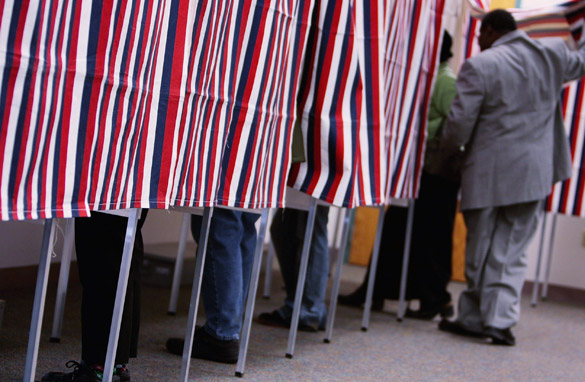 Obstacles remain for re-votes in Florida and Michigan (AP Photo)

(CNN) - Elected officials, state and national party leaders and campaign advisers in Michigan and Florida are confronting major obstacles in their quest to stage new Democratic votes in those states that would allow delegations to be seated at the party’s summer convention.

Negotiations for a new Michigan caucus fell apart Thursday evening, and were to re-start Friday, according to a source close to discussions.

The plans were stymied when the chairman of the Michigan Democratic party, Mark Brewer, reported that a new vote – which would involve an estimated two million voters - would cost $10 million.

The source said the cost "is a very real challenge," since the state party, which had agreed not to use taxpayer money to fund any re-vote, is uncertain how they would cover the cost. One option under consideration was to cover expenses through a combination of fundraising, money provided by the Democratic National Committee, and funds directly from the campaigns themselves.

Now a group has been formed to "figure out a solution and start again.” The group includes: Debbie Dingell, GM Union President Ron Gettelfinger, and Rep. Caroline Cheeks Kilpatrick. They will talk to the state party, the DNC and the campaigns to determine how to raise the money – though the source tells CNN the campaigns have not made it clear to the other parties precisely what they want, or what they would be willing to agree to.

One plan would call for a "firehouse caucus" that would take place at some point between mid-May and June 6. A "firehouse caucus" is an all-day vote that is run by the state party; it is called a caucus because the party cannot legally hold a primary: and unlike the procedure in a typical caucus, voters are free to show up throughout the day and voting is done by secret ballot.

In Florida, Florida Department of State spokesman Sterling Ivey, which oversees the State Board of Elections, said that any statewide primary would take at least 90 days to organize from the moment a plan is set in motion.

One potential snag is the fact that 15 counties in that state are changing over from touchscreen voting equipment to optical scanners. That new equipment is required by law to be in place by July 1 - so that may be the earliest a statewide vote could take place.

Another obstacle, as in Michigan, could be the cost. Estimates of the price tag for a new vote run as high as $20 million – although a mail-order election idea being floated by some Democratic state senators in Florida would cost significantly less, around $5 million.

And that plan comes with its own set of logistical headaches: there would have to be special legislation and state direction involved – and the process itself, which would be unprecedented in state history, would require special safeguards to ward off potential fraud.