JACKSON, Mississippi (CNN) - A few days after an aide to presidential contender Hillary Clinton accused her rival Barack Obama of behaving like Ken Starr, the Illinois senator kept up a recent string of counter-attacks, charging her campaign with strategically leaking a photo of him in African clothing and employing the “Republican playbook” in their effort to re-take frontrunner status in the Democratic race.

“When in the midst of a campaign you decide to throw the kitchen sink at your opponent because you’re behind, and you start - your campaign starts leaking photographs of me when I’m traveling overseas wearing the native clothes of those folks to make people afraid, and then you run an ad talking about who’s gonna answer the phone at three in the morning - an ad straight out of the Republican playbook - that’s not real change,” Obama told voters at a Mississippi campaign event Monday night.

The photo of Obama dressed in traditional local garb during a goodwill trip to Africa surfaced in the days before the critical March 4 contests. The Clinton campaign denied reports of any connection with its appearance, and Obama said at the time that he believed the New York senator’s assurances she did not know anything about the picture before it was published on the Drudge Report Web site the week before voters went to the polls in Ohio, Texas, Rhode Island and Vermont.

"...I take Senator Clinton at her word that she knew nothing about the photo. So I think that's something that we can set aside," Obama said at the Ohio debate late last month - a remark re-circulated by the Clinton campaign Monday night.

In a statement, the Clinton team attributed Obama’s Jackson remarks to his losses in last week’s primaries, and pointed to the Ohio comment, in which he seemed to absolve Clinton herself, though not her campaign, of responsibility for the photo’s distribution.

[cnn-photo-caption image= http://i.cdn.turner.com/cnn/2008/images/03/10/art.mccaintrip.ap.jpg caption=" McCain will head abroad next week."](CNN) - John McCain will lead a congressional delegation to Europe and the Middle East next week, his Senate office announced Monday.

McCain will visit Jerusalem, London, and Paris next Tuesday through Friday. He will be joined by South Carolina Sen. Lindsey Graham, a longtime supporter of the Arizona senator's presidential bid, and Independent Sen. Joe Lieberman.

WASHINGTON (CNN) - The Justice Department will monitor primary voting in three Mississippi counties that have a history of alleged voting irregularities, it said Monday.

Division attorneys will coordinate federal activities and stay in contact with local election officials, the DOJ said in a written statement.

Only two weeks ago the DOJ and Bolivar County settled a lawsuit involving alleged violations of a federal voting law. The court order, signed by a federal judge in Oxford, establishes procedures for the county to follow with regard to provisional ballots, known in Mississippi as affidavit ballots.

The Justice Department alleged Bolivar County had failed to provide a system which allowed voters to determine if their provisional ballots were counted. The rural county in the state's Delta region is about two-thirds black.

Rove taunted at University of Iowa

Rove, who was paid $40,000 to speak at the University, was confronted with an at-times hostile crowd of 1,000, and was interrupted on several occasions.

At one point during the speech, Rove reportedly lashed out at some of the students, saying, "You got a chance to ask your questions later and make your stupid statements, let me make mine."

Police also were forced to remove two people after they tried to perform a citizen’s arrest on Rove for what they said were his crimes while a member of the Bush Administration.

At one point, a person asked Rove if he has ever shed a tear over the war in Iraq.

"I shed a lot of tears and I have been inspired by many of the people who feel their son or daughter should not have to die in vain," he replied.

Cameras were only allowed to film the beginning of the speech.

Clinton: My thoughts are with Spitzer

"I obviously am sending my best wishes and thoughts to the governor and to his family," she told reporters after visiting with reporters in a local pizza parlor.

When asked whether Gov. Spitzer could survive politically she said "let's wait and see what comes out of the next few days. Right now I don't have any comment. I think it's appropriate to wish his family well and see how things develop."

WASHINGTON (CNN) - Prominent military backers of Sen. Barack Obama chimed in Monday as the Obama campaign fought back against the Clinton team's repeated suggestions that Obama was both not yet ready to be the nation's commander-in-chief but was ready to be Sen. Hillary Clinton's vice presidential running mate against Sen. John McCain, the presumptive Republican nominee.

"This is more surrealistic than in any other sense, when you are behind in a campaign and you are making propositions about a person being in the second spot," former Secretary of the Army Clifford Alexander, Jr. said when asked whether Clinton's suggestion that Obama run as her vice president was patronizing.

"There's something on an implied compliment as well," added former Secretary of the Navy Richard Danzig. "It's nice to think that Sen. Clinton recognizes that Sen. Obama is clearly qualified to stand a heart beat away from the presidency." "We embrace that proposition, indeed he stands qualified to be the president," said Danzig, who served in the administration of Sen. Clinton's husband.

"The reality is that none of the three remaining candidates in the field have been in an executive position whereby they had to respond to that proverbial 3 a.m. crisis," said Dr. Susan Rice, another former Clinton administration official who is supporting Obama. Rice also called Sen. Clinton's claim that she is qualified to handle such a crisis a "dubious proposition."

"We continue to ask the question: what exactly is the experience that Sen. Clinton can point to that indicates she has had real crisis management opportunities or crisis management challenges in the past," said Rice, who also attacked Sen. Clinton's claim of diplomatic involvement with events in China, Macedonia, and Northern Ireland.

The remarks by Obama's supporters also are the latest salvo in a pitched back-and-forth between the Clinton and Obama camps that began more than a week ago with the release of an ad by Sen. Clinton focused on managing an early morning crisis as president and where Clinton spokesman Howard Wolfson said Monday morning "We do not believe that Senator Obama has passed the commander in chief test. But there is a long way between now and Denver." 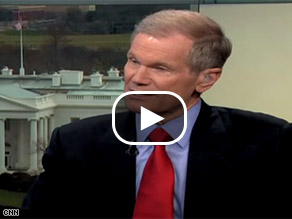 [cnn-photo-caption image= http://i.l.cnn.net/cnn/2008/POLITICS/03/10/spitzer/art.gov.spitzer.gi.jpg caption=" New York Gov. Eliot Spitzer has admitted involvement in a prostitution ring, The New York Times reports."](CNN) - Gov. Eliot Spitzer said he "acted in way that violates his obligation to his family," speaking hours after the New York Times reported he told senior administration officials he had been involved in a prostitution ring.

"I apologize first and most importantly to my family. I apologize to the public, to whom I promised better," he said.

He did not elaborate on the paper's claims and did not take any questions after making his statement.

"I am disappointed that I failed to live up to the standard I expected of myself," he said

It's called chutzpah, and Hillary Clinton has it to spare. The woman who is behind Barack Obama in states won, pledged delegates and popular vote is suggesting she might consider putting Barack Obama on the Democratic ticket with her as her vice presidential candidate.

Since her wins in Texas and Ohio, Hillary Clinton has twice referenced the idea. And over the weekend, Bill Clinton chimed in saying that the pair would make "an almost unstoppable force." It's all very interesting since the odds are quite good Clinton will not be the nominee and Obama will.

In today's New York Daily News, columnist Michael Goodwin writes: "It's a dream team all right, as in dream on. It's a fantasy because, in the Clintons' pitch, naturally, she is on top of the ticket and Obama is her No. 2. That's rich of her, considering that Obama leads in both the delegate race and the popular vote. Forget those pesky voters – Hillary has declared herself the winner!"

Obama rejects being Clinton's No. 2

Both Clinton, Obama's rival for the Democratic presidential nomination, and her husband, former President Clinton, have suggested a joint Clinton-Obama ticket - with Obama in the second slot.

"Senator Clinton is fighting hard. She's tenacious. I respect her for that. She is working hard to win the nomination. But I want everybody to be absolutely clear. I'm not running for vice president. I'm running for president of the United States of America," Obama told supporters during a rally in Columbus, Mississippi.