Ron Paul: My 'campaign is never over' 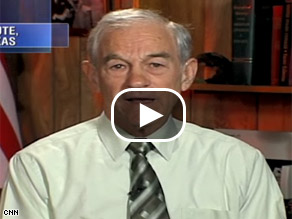 Given the dwindling number of primaries, “It is certainly winding down,” Paul said of his campaign in an interview Monday. However, “If you’re in a campaign for only gaining power, that’s one thing. If you’re in a campaign to influence ideas and future of the country, the campaign is never over,” said Paul who explained he has every intention of participating in the upcoming April 22 primary in Pennsylvania.

Although his campaign has largely been considered a long shot, Paul garnered a legion of enthusiastic supporters and was able to raise more money than many better known candidates in the field.

The Texas congressman also said he is not likely to support McCain because he disagrees with the Arizona senator on several issues. Paul acknowledged his party's unity is vital right now, but said he can’t reject what he’s talked about and supported for 30 years.

Ron Paul is the only Republican Presidential candidate to call for a speedy withdrawal of troops from Iraq. He also opposes the federal income tax and supports limiting federal spending.