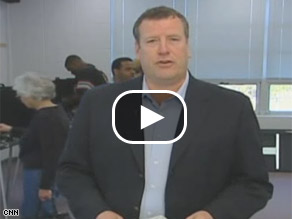 (CNN) - One of the most Republican states in the nation takes center stage Tuesday in the battle for the Democratic presidential nomination.

Mississippi, which has not voted for a Democratic candidate in a presidential election in 32 years, holds a Democratic primary Tuesday.

With the campaigns of Sens. Hillary Clinton of New York and Barack Obama of Illinois battling for every delegate, the political spotlight is on a state not used to being the center of such attention.