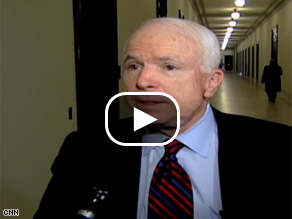 WASHINGTON (CNN) – John McCain left the campaign trail Thursday to return to the Senate to vote for a bill that would place a one-year moratorium on earmarks, money that is tacked onto bills by legislators for pet projects.

“I believe we must end this process, which has diverted billions in taxpayer dollars to needless projects, once and for all. If voters give me the pen, I will veto every single pork-barrel bill Congress sends me,” McCain said in a statement.

The Arizona senator blasts excess spending every step of the way on the campaign trail and though Barack Obama and Hillary Clinton will join him in voting for the measure, McCain criticized their past use of earmarks.

“They have used earmarks and some of them in a manner I don’t that think taxpayers would at all approve of,” McCain told CNN. “It’s hundreds of millions of dollars, taxpayers’ dollars, that are absolutely outrageously wasted.”

McCain urged Obama and Clinton to be more transparent and reveal the earmarks they’ve asked for, saying it’s likely much of that money hasn’t been spent yet and can be recuperated.

“I call on them to say ‘hey, don’t spend that money,’ because they’re earmarks, they didn’t go through a proper process and taxpayers can’t afford it.”

All three senators running for president are back in their day jobs on Capitol Hill Thursday for the first time in about a month.