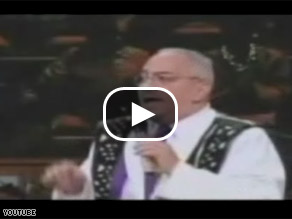 (CNN) - Barack Obama's Chicago minister, the Rev. Jeremiah Wright, is under fresh scrutiny, after an ABC News report Thursday shed light on some of his controversial sermons.

In one delivered last December, Wright argues Hillary Clinton's road to the White House is considerably easier than Barack Obama's because of his skin color.

"Hillary was not a black boy raised in a single parent home. Barack was," Wright says in a video of the sermon posted on YouTube.

"Barack knows what it means to be a black man living in a country and a culture that is controlled by rich white people. Hillary! Hillary ain't never been called a 'nigger!' Hillary has never had her people defined as a non-person," a fiery Wright also says.

Wright, who retired from his post earlier this year, also is seen saying in the video, "Who cares about what a poor black man has to face every day in a country and in a culture controlled by rich white people?"

Wright's sermon shortly after the September 11, 2001 terrorism attacks is also under scrutiny, during which he said America had brought on the attacks with its own practice of terrorism.

"We bombed Hiroshima, we bombed Nagasaki, and we nuked far more than the thousands in New York and the Pentagon, and we never batted an eye," he says. "We have supported state terrorism against the Palestinians and black South Africans, and now we are indignant. Because the stuff we have done overseas has now brought right back into our own front yards. America's chickens are coming home to roost."

Obama and Wright have long been close. Obama has been a member of Wright's church since his days in law school, and Obama's bestselling book, The Audacity of Hope, takes its title from one of Wright's sermons. Wright also married the Obamas and baptized their two children.

But Obama has long maintained he is at odds with some of Wright's sermons, and has likened him to an "old uncle" who sometimes will say things he doesn't agree with. He has also specifically denounced Wright's 9/11 comments.

An Obama campaign spokesman also said Thursday the Illinois senator "deplores divisive statements whether they come from his supporters, the supporters of his opponent, talk radio, or anywhere else."

UPDATE: Speaking with the Pittsburgh Tribune Review, Obama said, "I profoundly disagree with some of these statements."

"Here is what happens when you just cherry-pick statements from a guy who had a 40-year career as a pastor. There are times when people say things that are just wrong. But I think it's important to judge me on what I've said in the past and what I believe," he also said.