[cnn-photo-caption image= http://i.cdn.turner.com/cnn/2008/images/03/15/art.obama.ap.jpg caption=" Obama campaigned in Indiana Saturday."]
(CNN) - Referencing the recent uproar over his former minister's controversial sermons, Barack Obama on Saturday denounced the "forces of division" that he says have become part of the Democratic race for the White House.

Speaking to a sold-out crowd in Plainfield, Indiana, Obama again said he sharply disagreed with the some of the Rev. Jeremiah Wright's past statements, saying they remind him of the country's "tragic history when it comes to race."

"I knew him and know him as somebody in my church who talked to me about Jesus and family and friendships but clearly had – if all I knew were the statements that I saw on television I would be shocked," Obama said. "And it just – it reminds me that we have a tragic history when it comes to race in in this country – we have got a lot of pent up anger and bitterness and misunderstanding."

Obama's comments come one day after he formally repudiated Wright's sermons - recently posted on the Internet and the subject of an ABC News report - that have drawn fire. The campaign also said Friday Wright no longer had a leadership position within the campaign. 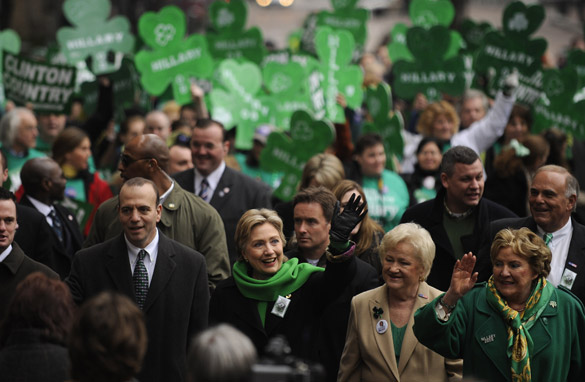 It was the first of two holiday parades for the New York senator. She travels to Scranton in eastern Pennsylvania to take part in that city's St. Patrick's Day festivities later in the day.

Pennsylvania is the next big battleground in the race for the White House. There are 158 delegates at stake when the state holds its primary on April 22.

Clinton marched about two miles on the parade route through downtown Pittsburgh. Thousands of people lined the streets, cheering and screaming, some holding green signs that said "Clinton Country" with others that said O'Bama. At times there were mini-sign wars, all in good Irish fun.

However, some boos could be heard as Clinton passed a multi-tiered parking garage, and one man held a handwritten sign that said "Hillary you are a SHAM and have the personality of a ROCK."

At the end of the parade Clinton addressed a crowd, saying, "May the luck of the Irish be with us all." An announcer called the Clintons "great friends of the Pittsburgh Irish."

Clinton has Pennsylvania to herself Saturday. Rival candidate Sen. Barack Obama of Illinois is campaigning in Indiana, which holds its primary two weeks after Pennsylvania's. And Sen. John McCain of Arizona, the presumptive GOP presidential nominee, is on his way to Europe and the Middle East for a week long congressional trip. McCain campaigned in Pennsylvania on Friday.

Clinton wants Michigan resolution by the end of the week

[cnn-photo-caption image= http://i.cdn.turner.com/cnn/2008/images/03/15/art.clintonplane.ap.jpg caption=" Clinton said she wants a speedy solution in Michigan. "]SCRANTON, Pennsylvania (CNN) - Hillary Clinton hopes Michigan Democrats will resolve their 2008 primary limbo by the end of the week, she told reporters during a press availability aboard her plane while campaigning here.

“Michigan is trying very hard to work this out,” she said. “I think that they’re moving in the appropriate direction to have a revote. Otherwise they should just count the votes and if they’re not going to do that they should give people the opportunity to once again express their opinions about this race.”

The New York senator was asked how she would respond to voters who felt that allowing Michigan and Florida a chance to hold new contests after being punished for violating party rules was like moving the goal posts at the end of the game.

“The rules were changed for a lot of things. We saw New Hampshire and South Carolina change their dates, no penalties. That was in violation of the rules. So the rules have been kind of difficult for people to really understand and follow,” she said. “It’s important that everybody help Michigan and Florida figure out how best to meet their obligations to their voters and I think that should be the principle concern.”

Clinton said it was up to officials in Michigan and Florida to decide how these possible “revote” contests will be paid for. Some Clinton supporters like Pennsylvania Governor Ed Rendell have offered to help raise money to pay for the new contests.

When asked whether she was frustrated with the leadership of the Democratic National Committee for either not reaching a speedy end to this problem or for penalizing the two states to begin with, she smiled and answered: “Well, we are where we are right now so I don’t think it’s useful to sort of look back and figure out what might have been done differently.”

Clinton is scheduled to give a speech about Iraq on Monday in Washington, DC and was unwilling to preview any details.

[cnn-photo-caption image= http://i.l.cnn.net/cnn/2008/POLITICS/03/12/spitzer.investigation/art.spitzer.gi.jpg caption=" Spitzer resigned his post Wednesday."]NEW YORK (CNN) - For those who can't get enough of the sex scandal that brought down New York Gov. Eliot Spitzer, Sirius Satellite Radio has launched what it is calling "Client 9 Radio," a special channel dedicated to covering all aspects of the Spitzer saga.

The new station began broadcasting Friday at 5 p.m. ET, the company announced. Programming will continue only until midnight on March 17, a statement from Sirius said.

Spitzer resigned Thursday after a federal probe looking into suspicious money transfers linked him to a prostitution ring.

He apologized for not living up to expectations, but did not admit to anything specific. Spitzer has not been charged with any crime.

The new channel was launched in response to strong interest shown by Sirius' audiences in the story, the company said.

It will offer a "forum for this national conversation," where listeners are invited to call in and discuss all aspects of the story.

Additionally, "Client 9 Radio" will offer segments produced with Sirius commentators and experts, such as Judith Regan and Bill Bennett, the statement said.

[cnn-photo-caption image= http://i.cdn.turner.com/cnn/2008/images/03/15/art.mccaintrip.ap.jpg caption=" McCain will host a London fundraiser next week."](CNN) - During a congressional trip to the Middle East and Europe next week, John McCain will take a break from his Senate duties to host a $1,000 per plate fundraising lunch for his presidential campaign at London’s Spencer House.

The fundraiser will be held towards the end of his week-long trip, which will include visits to Iraq, Jerusalem, London and Paris with supporters and longtime friends Sen. Lindsey Graham and Sen. Joe Lieberman. They are slated to meet with French President Nicolas Sarkozy, British Prime Minister Gordon Brown and Israeli Prime Minister Ehud Olmert.

The three senators are members of the Senate Armed Services Committee, and McCain has been adamant that presidential politics will not be discussed next week. However, aides admit that the trip will emphasize his foreign policy credentials - a pillar of his presidential platform.

“This will be one of many regular trips that I have taken over the last 20 years as a member of the Senate Armed Services Committee,” McCain told CNN on Tuesday. “I think that it’s very important as the ranking member that I understand and keep up to date, particularly where young Americans may be in harms way. He added, “I regret that more of my colleagues don’t spend more time in foreign travel.”

A McCain spokeswoman said that this is not the first time a presidential candidate has raised money overseas, noting that Rudy Giuliani did the same during the primary process.

The campaign insists the U.S. Treasury will be reimbursed for all expenses relating to the fundraiser, including transportation to and from the event, the hotel and McCain’s flight back to the U.S.

"Senator Obama addressed it, voters are going to look at what he had to say, and we'll take it from there," Clinton Press Secretary Phil Singer said of the issue on a conference call with reporters.

"If you're running for president on the basis of your claims of experience, when you then cite examples, you should be careful to be accurate," Craig said. "The evidence should be accurate. And my point is that Senator Clinton and her supporters have in serious ways overstated, if not grossly exaggerated, the nature of her experience."

"I think she is misleading the American public on the nature of her experience," he also said.Craig, a supporter of Barack Obama, was the director of policy planning at the State Department under former President Clinton.

He was a top adviser to former Secretary of State Madeline Albright and served as counsel to former President Clinton during the impeachment hearings.

His comments come days after he penned a strongly worded memo on behalf of the Obama campaign that appeared to suggest the New York senator was not ready to be commander in chief."Hillary Clinton's argument that she has passed 'the commander-in-chief test' is simply not supported by her record," he wrote in that memo.

The Clinton campaign called the memo a "false and misleading attack."Pressed about those comments Friday, Craig appeared to dial back, saying, "I think she would be a capable commander in chief.

I think Barack Obama, who is my candidate, would also be a capable commander in chief. I'm not denigrating that."But Craig specifically took issue with Clinton's claim of having a role in the Northern Ireland peace process."

It's a little bit presumptuous for the first lady, who would meet people and support people to take credit away from the Irish themselves who did it," he said.Pressed about her role in the process, Clinton told NPR earlier this week, "I wasn't sitting at the negotiating table, but the role I played was instrumental."

[cnn-photo-caption image= http://i.l.cnn.net/cnn/2008/POLITICS/03/14/mccain.earmarks/art.mccain.gi.jpg caption=" Sen. John McCain of Arizona has long been a vocal critic of earmarks."]SPRINGFIELD, Pennsylvania (CNN) - Sen. John McCain charged Friday the Senate was ignoring the will of the people when it rejected a one-year moratorium on earmarks that he co-sponsored.

The Senate voted 71-29 against the ban late Thursday night.

"There's only one place left in America that they don't get it," McCain told a town hall gathering outside Philadelphia, Pennsylvania, referring to Washington. "Pork-barrel spending is out of control and Americans want it stopped."