[cnn-photo-caption image= http://i.cdn.turner.com/cnn/2008/images/03/18/art.murtha.gi.jpg caption="Murtha campaigned with Clinton in his home district in Pennsylvania."]
LATROBE, Pennsylvania (CNN) - Rep. John Murtha's endorsement of Hillary Clinton on March 18 came at a welcome moment for the Democratic candidate: it was only her second endorsement from a superdelegate over the course of several weeks.

On Monday evening in his home district, the anti-war champion and 17-term congressman campaigned with Clinton for the first time and explained his presidential pick.

"Let me tell you something," Murtha said, taking the microphone from Pennsylvania Gov. Ed Rendell. "I have served with seven presidents, and they all got gray hair except for Reagan. Anybody that’s been in the White House for eight years knows how tough it is, understands, has the experience that you need to be president of the United States."

Murtha said he is "convinced that we are in one of the worst situations that I have seen in the 35 years I have been in Congress," but argued that Clinton is “a person that understands the policy" who can restore "our credibility worldwide."

Rendell praised him for vocalizing his opposition to the Iraq war in 2005 and joked that "Jack Murtha is so important to Pennsylvania and has done so much for us that I almost considered having the historic commission put up one of those markers outside his house."

Clinton said she was honored to have Murtha's endorsement.

CHARLOTTE AMALIE, U.S. Virgin Islands (CNN) — For three days, Democratic presidential candidate Barack Obama is enjoying some private down time on the island of St. Thomas, a source close to the U.S. territory's Government House in the capital of Charlotte Amalie confirmed Monday.

"When Joe McCarthy questioned others' patriotism, McCarthy (1) actually believed, at least aparently, the questions were genuine, and (2) he did so in order to build up, not tear down, his own party, the GOP,” wrote Gordon Fischer, a former chair of the Iowa Democratic Party, wrote on his blog. “Bill Clinton cannot possibly seriously believe Obama is not a patriot, and cannot possibly be said to be helping — instead he is hurting — his own party. B. Clinton should never be forgiven. Period. This is a stain on his legacy, much worse, much deeper, than the one on Monica's blue dress."

Fischer was referring to President Clinton’s comments over the weekend that a race between John McCain and Hillary Clinton would be a contest between two people who love their country, which some Obama supporters - including former Air Force Gen. Tony McPeak – have interpreted as an attack on Obama's patriotism.

Fischer later removed the post from his blog, replacing it with an apology. ”I sincerely apologize for a tasteless and gratituous comment I made here about President Clinton,” he wrote. “It was unnecessary and wrong. I have since deleted the comment, and again apologize for making it. It will not happen again. I hope my readers will accept my apology and we can move on to the very important issues facing our state and country. Thank you.” Fischer endorsed Obama last fall.

END_OF_DOCUMENT_TOKEN_TO_BE_REPLACED

Any Democrat listening the harsh language emanating from the campaigns would be forgiven for thinking it might be tough to unify the party this fall.

Clinton was asked by a voter here Monday about the increasingly contentious race, and whether Democrats can manage to come together in the general election. Clinton re-emphasized that Democrats must unite after the primary battle.

"I think we will have a unified Democratic party once we have a nominee, we will go into fall election very committed to taking back the White House," she said. "None of the things I talk about will happen if Sen. McCain is elected."

She praised McCain and their work in Senate together, but added, "As he himself has said, he doesn’t know much about the economy."

The mostly female audience laughed as she ribbed McCain over his economic credentials, but she was serious as she urged Democrats to put aside their differences to defeat the presumptive GOP nominee.

"I think that people that who would have voted for either me or Sen. Obama are going to ask themselves, 'Wait a minute, there are really big differences between the Democrats and the Republicans.' And let’s have a unified party and elect a Democratic president."

(CNN)– In the latest edition of America Votes 2008, the candidates relate their policy visions on the campaign trail.

Related: Tax cuts and the candidates. Grover Norquist, President of Americans for Tax Reform, talks to CNN's Bob Costantini about the Bush tax cuts and John McCain's support for making them permanent.

The Democratic National Committee’s Rules and Bylaws committee approved Puerto Rico’s revised delegate selection plan on Monday afternoon. The territory was previously scheduled to hold caucuses on June 7, but Puerto Rico Democratic Party officials said that the June 7 date listed on its original plan was the result of a typo.

Puerto Rico Democrats originally planned to hold caucuses, not anticipating that the Democratic presidential race would continue to be competitive into June. According to Puerto Rico party officials, the change was made to a primary to improve voter turnout and also to minimize any voting confusion that may stem from the caucus process.

Puerto Rico has more delegates at stake at its primary than 34 other states and territories, making it one of the biggest prizes of the remaining 10 contests.

The Rules and Bylaws Committee also approved some procedural modifications to the Guam caucuses, scheduled for May 3, but no substantive changes were made.

[cnn-photo-caption image= http://i.l.cnn.net/cnn/2008/images/02/20/art.wolf2006.cnn.jpg caption="Blitzer: My trip to Iraq was intense and powerful."]
WASHINGTON (CNN) - Three years ago today, I was in Iraq. I went around the country – from Baghdad to Basra, from Falluja to Mosul and Balad. I had flown there with the then commander of U.S. Forces in the Middle East, Gen. John Abizaid.

I remember everything I saw because it was so intense and powerful. The images were amazing. But some things continue to stand out, especially at this time of the year.

I vividly remember watching hundreds of troops pray at a Sunday Easter Mass service in Baghdad, and their prayers were intense. The military chaplain’s words were deeply religious. Watching the men and women pray took on a whole new meaning for me that day. So many of the troops later told me they were praying simply to be able to survive the war in one piece. They were praying for their fellow troops. They didn’t want to die in Iraq. They didn’t want to be severely injured.

When I was there with Gen. Abizaid three years ago, more than 1,500 American troops had been killed in Iraq. Now, the number has reached 4,000.

I was thinking about that prayer service this past Easter weekend. Most of those troops I saw in Baghdad that day are probably home right now. But some of them are also no doubt back in Iraq serving a second or even third tour of duty. The soldiers have 15 month rotations in Iraq though the Pentagon is hoping to reduce that soon to 12 months. These men and women who serve are all volunteers and their sacrifices are enormous.

Cafferty: Why would Clinton not tell the truth about her 1996 Bosnia trip?

[cnn-photo-caption image= http://i.cdn.turner.com/cnn/2008/images/03/24/art.bosnia.ap.jpg caption=" First Lady Hillary Rodham Clinton kisses Emina Bicakcic, aged eight, from Sarajevo who dedicated a poem to her shortly after her arrival at the Tuzla Air Base, Monday March 25, 1996."]

On two different occasions, Senator Hillary Clinton has described a trip she took as first lady to Bosnia in March of 1996.

To hear her tell it, she was lucky to escape with her life, landing in a hail of sniper fire. She said they were forced to cut short the greeting ceremony at the airport and, "run with our heads down to get into the vehicles to get to our base."

But apparently there was time to stop and visit at the airport with an 8-year-old girl who greeted Mrs. Clinton on the tarmac when she landed and read her a poem.

The military commander on hand to greet Clinton at the time, Major General William Nash, told the Washington Post he was unaware of any sniper threat to Clinton during her 8-hour stay.

Also traveling with the first lady was her daughter Chelsea, the singer Sheryl Crow and the comedian Sinbad, who said the scariest part of the trip was deciding where to eat. 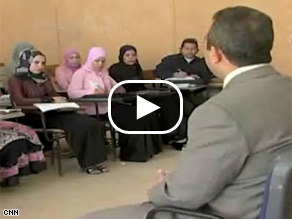 (CNN)–The fledgling Iraqi government may be slipping in most surveys of top American voter concerns – but students at Baghdad University are paying rapt attention to the political action here in the United States.

As the war enters its sixth year and the U.S. troop death toll passes 4,000, CNN’s Kyra Phillips gets the Iraqi perspective on the U.S. presidential contest from political science students at Baghdad University.

DETROIT, Michigan (CNN) - Detroit Mayor Kwame Kilpatrick defiantly declared his innocence just an hour after a prosecutor charged him with perjury and other felonies.

"This has been a very flawed process from the beginning," said Kilpatrick. "I look forward to complete exoneration."

Earlier Monday, Wayne County Prosecutor Kym L. Worthy announced that she would charge Kilpatrick with multiple counts of perjury, obstruction of justice and misconduct in office in connection with accusations that Kilpatrick lied in court about a romantic affair and the firing of police officers.

Watch Kilpatrick's response to the charges