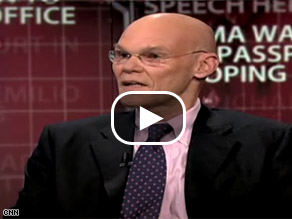 Watch James Carville discuss his view of Bill Richardson's decision to back Obama.

WASHINGTON (CNN) - Clinton campaign adviser James Carville said Monday that he stood behind his controversial weekend comment that compared Bill Richardson's decision to back Barack Obama to the betrayal of Jesus by Judas – a statement the New Mexico governor termed "gutter tactics."

"He quoted me accurately and in context," Bill Clinton's 1992 campaign manager told Wolf Blitzer on CNN's The Situation Room. "I think the statement had the desired effect. It was what I said."

Carville, a former Clinton White House adviser told the New York Times Saturday that Richardson's endorsement "came right around the anniversary of the day when Judas sold out for 30 pieces of silver, so I think the timing is appropriate, if ironic."

On Monday, Carville said he hadn't spoken with Hillary Clinton about Richardson's endorsement, but that he was outraged by the development, given the New Mexico governor's history with both the New York senator and her husband, former President Bill Clinton.

Richardson served in two different cabinet positions under President Clinton, and watched this year's Super Bowl with him.

Carville's latest comments came hours after Clinton spokesman Howard Wolfson told reporters that he would not have made the remark, and would have apologized for it.

But Carville, a CNN commentator, was unapologetic, telling CNN he knew the impact his words would have. "I doubt if Governor Richardson and I will be terribly close in the future," he said, but "I've had my say....I got one in the wheelhouse and I tagged him."