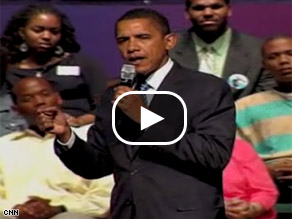 (CNN) – Democrats Hillary Clinton and Barack Obama, engaged in an increasingly brutal war of words, directed some of their verbal fire power this week at presumptive Republican nominee John McCain – who immediately fought back.

On Wednesday, the Obama campaign took aim at both of McCain’s major policy speeches. At a campaign event in North Carolina, Obama said the McCain’s economic address “offered not one policy, not one idea, not one bit of relief… We’ve been down this road before. It’s the road that George Bush has taken for the last eight years.”

In a statement released later Wednesday afternoon, Obama spokesman Bill Burton said “John McCain is determined to carry out four more years of George Bush's failed policies, including an open-ended war in Iraq that has cost us thousands of lives and billions of dollars while making us less safe.”

Hillary Clinton has also spent the past two days tying McCain to Bush on foreign policy, telling a Pennsylvania audience that the Arizona senator’s policies represented “four more years of the same.”

The McCain campaign released a statement in response to Obama’s criticism of his economic policies, saying, “Senator Obama’s blatant mischaracterizations aren’t the new politics he’s promised America, they’re the old attack and smear tactics that Americans are tired of.”

McCain also took an indirect hit at the Democratic candidates in his foreign policy in Los Angeles, saying that withdrawal from Iraq – a position advocated by both of his potential fall opponents – would result in “horrendous violence, ethnic cleansing and possibly genocide.”