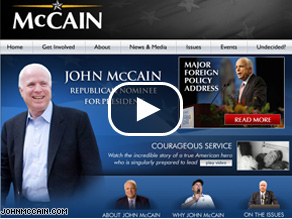 The McCain campaign reported spending $58 million this election cycle, which is a few million more than what is permitted for candidates who commit to public financing in the primaries.

Led by bloggers at Firedoglake and DailyKos, the group submitted a complaint to the FEC on Tuesday, and is asking for more signatures online to be added to another, larger complaint.

McCain signed up for the guaranteed public money last year, but in February, his campaign wrote a letter to the FEC announcing he would turn down government matching funds for his primary campaign.

FEC Chair David Mason replied that the four commissioners must first vote in favor of the withdrawal request - a development which is not possible right now, as vacancies leave only two commissioners in the FEC.

A McCain campaign official says the complaint is "frivolous and without merit."

Last month, the Democratic National Committee filed a similar FEC complaint against McCain, charging that he was not eligible to withdraw from the public financing system and the strict spending limits it requires.