Obama: Had Wright not retired, I'd have left church 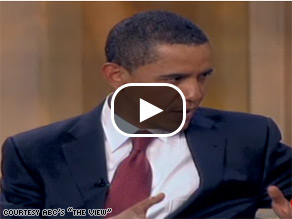 Watch parts of Obama’s interview on “The View”

(CNN) - Sen. Barack Obama says in an interview scheduled to air on TV Friday that he would have left his church if his pastor had not retired and had not acknowledged making comments that "deeply offended people."

Obama talked about the dispute as it continued to brew over some of the Rev. Jeremiah Wright's sermons and comments, which many viewed as anti-American and racist toward whites.

Bulletins from Chicago's Trinity United Church of Christ in 2007 include comments - reprinted from other sources - that maintain South Africa and Israel worked on "an ethnic bomb that kills blacks and Arabs." They also quote a historian who said that "what the Zionist Jews did to the Palestinians is worse than what the Nazis did to the Jews."

The articles appeared in a church bulletin section called the "Pastor's Page," and include one that originally ran in The Los Angeles Times. That article was written by a senior official with Hamas, which the U.S. government considers a terrorist organization.