Clinton: How about a bowl-off for the nomination?

“And when this game is over the American people will know they’ll have a president who’s ready to bowl on day one. We don’t have a moment to spare because it’s already April Fools Day,” she told reporters at a Pennsylvania press conference.

The New York senator that added it was time for the Obama campaign “to get out of the gutter. For all the pins to be counted…” and said she would spot him two frames.

Clinton may have been joking – but in a winner-take-all bowl-off, she might have the edge. This Saturday in Altoona, Pennsylvania Obama came in a distant third in a three-way bowling game, finishing with an underwhelming score of 37 over seven frames.

“I was terrible,” the Illinois senator told the crowd at the bowling alley, according to the Associated Press. "My economic plan is better than my bowling.”

Responded one unimpressed bystander: "It has to be."

Watch Obama struggle at the lanes

Dean: Democrats will unify around nominee

Dean stressed again that he would like to see the race resolved by July 1—weeks before the party’s August convention.

Watch the entire interview today during the 4 p.m. hour of The Situation Room.

Pelosi: Dem race has to 'run its course'

(CNN) - House Speaker Nancy Pelosi said Tuesday she wants the Democratic presidential election to continue through the last round of primaries, but warned against a floor fight at the party's August convention.

"I think the election has to run its course," Pelosi said, later adding, "I do think it is important for us to get behind one candidate a long time before we go to the Democratic convention if we expect to win in November."

Pelosi's comments come as Hillary Clinton is increasingly suggesting she is willing to take her presidential bid all the way to the Democratic convention at the end of the summer.

"I have no intention of stopping until we finish what we started and until we see what happens in the next 10 contests and until we resolve Florida and Michigan. And if we don't resolve it, we'll resolve it at the convention - that's what credentials committees are for," the New York Democrat told the Washington Post.

In the interview Tuesday, Pelosi said she understands why Clinton is making that argument, since 10 more primary contests remain over the next two months.

"We don't know what these next elections will do. We do not know what the conduct of the campaigns in the next four to six weeks will produce," she said. "So if you are a candidate for president, you certainly are saying that you are going to the convention - you can't say anything but. And Senator Clinton might well be going to that convention as the nominee."

But Pelosi suggested a clear frontrunner will emerge well before the party's convention.

"At some point it'll be clear that there is a frontrunner - and at that point we would hope that, for the greater good, for the country, that we can all rally as early as possible behind one person," she said.

The House Speaker also maintained her argument that the party's superdelegates should not overturn the pledged-delegate outcome, and suggested she wasn't affected by a recent letter from powerful Clinton fundraisers criticizing that stance.

"It wasn't important to me," she said of the letter. 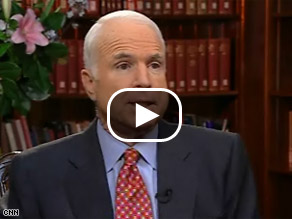 (CNN) - John McCain Tuesday brushed off suggestions his well-documented quick temper may hinder his ability to serve as President of the United States.

In an interview with CNN's Dana Bash, the presumptive Republican nominee acknowledged he can get angry from time to time, but called that face a "very minor thing" compared to his accomplishments in the Senate.

"[My] leadership qualities required an even temper and those abilities to reach across the aisle and work with democrats for the good of my constituents and the country are clear indications that that’s a very minor thing as compared to my record of accomplishment."

McCain also said he thinks voters will expect him to get angry at times.

McCain has long been known by Senate colleagues for his at-times angry outbursts. Most recently, he issued Texas Sen. John Cornyn an apology after shouting "F- you' at him during last year's heated immigration debate.

Chelsea Clinton received another question Monday that she chose not to answer.

(CNN) - It's a subject Chelsea Clinton would clearly like to avoid, but the former first daughter again fielded a question on the Monica Lewinsky scandal Monday.

Campaigning at North Carolina State, a student brought up the touchy-subject, saying the scandal was the public's business since the incident occurred when her father was President of the United States.

The younger Clinton sharply disagreed she should discuss the matter.

"It's none of your business," she said. "That is something that is personal to my family. I'm sure there are things that are personal to your family that you don't think are anyone else's business either."

As the student left the event, the former first daughter also said she doesn't think people should "vote for or against my mother because of my father.

The student later defended his comments to CNN affiliated WTVD, saying "I felt that it is our business because he was president at the time, and his first duty is to be chief citizen."

The comments follow an incident at Butler University last week when a student asked whether the scandal had hurt her mother's reputation.

Chelsea Clinton appeared taken aback by the question, saying, "Wow, you're the first person actually that's ever asked me that question in the, I don't know maybe, 70 college campuses I've now been to, and I do not think that is any of your business."

The Butler student later said he was a supporter of Hillary Clinton's who was merely giving the former first daughter an opportunity to show how strong her mother is.

[cnn-photo-caption image= http://i.cdn.turner.com/cnn/2008/images/03/19/art.clintonsp.ap.jpg caption=" Clinton says Obama and his allies are trying to halt elections."]
(CNN)— Hillary Clinton continued to push back pressure to drop out of the presidential race Monday night, once again accusing rival Barack Obama and his supporters of trying to stop voting before every state can weigh in.

In an interview with WNCT in North Carolina Clinton said, “I know that a lot of Senator Obama’s supporters have tried to stop this election before people have a chance to vote.”

The New York senator has made similar remarks at stations in Indiana whose primary is May 3 and in Montana where they vote June 3.

Bill and Hillary Clinton have rejected the wishes of Obama’s supporters since the calls from Sen. Leahy and Sen. Dodd came last week urging Clinton to drop out of the race.

Obama himself has said Clinton can stay in the race as long as she wants. "She is a fierce and formidable competitor, and she obviously believes that she would make the best nominee and the best president," the Illinois senator said last week.

Campaigning over the weekend in Pennsylvania, Bill Clinton told a group of supporters that party insiders looking to stop the election process needed to step back and let the process move forward.

“We just need to relax and let this happen,” said the former President. “Nobody’s talking about wrecking the party.”

The Clinton campaign also released a fundraising email Saturday, signed by Bill Clinton, urging her supporters to donate to her campaign in response to calls from Obama’s allies for the race to end.

“There’s no better way to tell Hillary that you support her staying in than to make a contribution to her campaign,” Bill Clinton wrote.

With 2,024 delegates needed to clinch the Democratic nomination, Obama leads with 1,625 delegates to Clintons 1,486.

Related: Glenn Beck says the voters should decide if Clinton should drop out

"I think boycotting the opening ceremony, which really gives respect to the Chinese government, is something that should be kept on the table," Pelosi told "Good Morning America" co-anchor Robin Roberts in an interview to air Tuesday morning, according to the ABC News Web site. "I think the president might want to rethink this later, depending on what other heads of state do."

Pelosi said she does not think U.S. athletes should boycott the games themselves.

Dobson says he'll weigh in at the polls this November

(CNN) - John McCain has effectively captured the Republican nomination, but he’s still struggling to win over a key constituency of one: Focus on the Family founder James Dobson, who once said he would not vote for the Arizona senator “under any circumstances.”

Some disappointed conservatives had threatened to stay home on Election Day – but Dobson’s interview Monday may send a message to millions of evangelicals that they should reconsider that decision and head to the polls.

In an interview last night, the evangelical leader told FOX host Sean Hannity that while he has issues with all the candidates left in the race, particularly the Democrats, he would definitely be casting his ballot this fall.

"Let me just say that I will certainly vote,” said Dobson. “I think we have a God-given responsibility to vote, and there are all of the candidates and the issues down the ballot that we have an obligation to weigh in on and let our voices be heard."

But he stopped short of embracing McCain’s presidential bid, and expressed skepticism about his orthodoxy on key conservative stands, asking Hannity skeptically if the senator had given a commitment on stem cell research.

Washington Post: Tricky Votes Loom For 3 Candidates
With Congress returning today after a two-week break, leaders from both parties are preparing legislative agendas - on issues including the economy, Iraq and immigration - designed to present the three remaining White House candidates with dangerous political choices.

LA Times: Obama, Mccain Bicker On Iraq
In one of their sharpest exchanges of the presidential campaign, Republican John McCain and Democrat Barack Obama clashed over the Iraq war on Monday, with each challenging the other's credentials on national security.
NY Times: Democrats Hit the Campaign Trail in Pennsylvania
The Democratic campaign took on the feel of the early voting states on Monday, back when the candidates’ buses would crisscross paths in a single state. Senators Hillary Rodham Clinton and Barack Obama were both in eastern Pennsylvania courting voters, on a day in which Mr. Obama gained a superdelegate.

Washington Post: As Rivals Battle, McCain Builds November Machine
As his Democratic presidential rivals squabble, Sen. John McCain has moved to transform his ragtag primary campaign into a general-election operation by boosting fundraising, establishing control over the Republican National Committee, and beginning a conversation with voters who live in states where he has not campaigned.

END_OF_DOCUMENT_TOKEN_TO_BE_REPLACED

*Hillary Clinton is campaigning in Pennsylvania today. She tours the MJ Donovan Company and delivers remarks to the Pennsylvania AFL-CIO in Philadelphia. She also attends a town hall meeting in Wilkes-Barre and a rally in Erie.