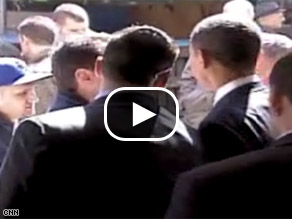 Watch a man repeatedly asks Obama to pose for a photograph.

PHILADELPHIA, Pennsylvania (CNN) - A visibly annoyed Barack Obama gave a flat-out "no" Wednesday to a rather persistent man who approached the Illinois senator numerous times throughout morning asking to pose for a photograph with him.

The campaign claims the man was seeking to sell items on eBay, the online auction site.

"They wanted a picture to authenticate the signatures," said spokeswoman Jen Psaki. "They were first at the Senator's hotel and tried to get in front of third graders who were lined up to see Senator Obama."

In the e-mailed statement, Psaki continued, "After being disruptive the police moved them to the sidewalk. They then followed the motorcade to the second stop at the market and continued to push for a picture to authenticate whatever they could get signed."

(Full back-and-forth from the pool report after the jump)

Run-in #1: outside a shop, on the way in
Man: Senator can I have a quick picture with you
Man: It will take you two seconds. Don't cram me, I'm not doing anything to anybody. Jesus.

Run-in #2: after the shop
Man: "Senator can I get a picture with you?"
Obama: (slightly annoyed) "You are wearing me out, brother."
Man: "I got one with [Clinton] and I got one with McCain, come on Senator that's not right."

Run in #3: in the street
Man: "Senator, can I please, a quick one?
Obama: (very annoyed) No, you know what? no.
Man: Can I just say something to you real fast.
Obama: Yeah you can.
Man: I had one with [Clinton], had one with Senator McCain
Obama: I am sure you do. Because when I was trying to talk to some kids - and I know, look -

Man: No, my wife is a school teacher and she was there, she had to go back and that wasn't right what wont you just take a picture with me, I'm not asking you for a autograph, it's for my family.

Obama: Yeah well, whatever. Just take it. I won't be smiling. Because you're wearing me out. ..No no, you've been really rude about it. Just take a shot.

Obama and the man did not take a shot, the man was still arguing and the secret service stepped in (non confrontationally), just putting a hand between him and Obama.

Secret Service: That's it.
Man: No I'm good. All I want is a picture, that's it.