Regardless of who Democrats eventually pick to be their nominee, they have made history with a female candidate and an African American candidate. Senior Political Analyst Bill Schneider reports on new poll numbers which show whether Americans are ready to make history electing a woman or an African American.

Meanwhile, John McCain continues his “biography tour,” but how effective is his message. CNN’s Dana Bash reports from Florida on how well McCain’s background pitch is working. 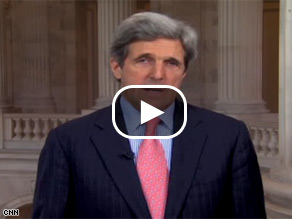 “John McCain can run around all that he wants right now talking about his military experience,” Kerry told CNN’s Suzanne Malveaux, “but he made the wrong judgment about Iraq, he has a foreign policy that has made us weaker.”

He added that the last eight years have been a failure in foreign policy, “and John McCain has supported it in its entirety.”

McCain himself has acknowledged his support of the war in Iraq could cost him the presidency.

Pointing to former President Ronal Reagan’s lack of military experience, Kerry explained presidents have overcome not having a military background by knowing who to ask questions of, and surrounding themselves with people who do share military experience.

UPDATE: A Republican National Committee spokesman blasted Kerry's comments. “John Kerry has absolutely no credibility on Iraq. Kerry’s attacks on Iraq ring hollow considering his inability to offer a consistent much less coherent stance on the issue," said RNC spokesman Alex Conant in a written statement. "Kerry would be better off trying to explain why Barack Obama broke his promise and voted against troop funding for our men and women in uniform.”

[cnn-photo-caption image= http://i.cdn.turner.com/cnn/2008/images/04/03/art.barr.gi.jpg caption="Bob Barr is pondering a Libertarian presidential run."] WASHINGTON (CNN) – Former Republican Congressman Bob Barr of Georgia is inching closer to seeking the presidential nomination of the Libertarian Party, and plans to shed some light on his plans at a weekend party gathering in Kansas City.

Two sources familiar with Barr’s deliberations say it is their understanding he will make clear he is ready to seek the Libertarian nomination if there is evidence of significant support within the party. Both sources are active in Libertarian politics and spoke to CNN on condition of anonymity.

Barr is scheduled to deliver the keynote address at a regional Libertarian Party gathering this weekend.

Contacted Thursday evening in Atlanta, the former congressman confirmed he was considering such a campaign, but would not discuss the specifics of what he planned to tell the weekend meeting.

In separate media interviews, New Jersey Gov. Jon Corzine and Pennsylvania Rep. Jack Murtha both indicated they believed Clinton will be unable to convince enough superdelegates to support her if she finishes second to Obama in both the pledged delegate count and the popular vote.

Speaking on CNBC, Corzine suggested it won't be enough for Clinton to argue she deserves the nomination because she has won more crucial swing states than Obama - a talking point the senator's campaign has long argued.

"I think it would be a very hard argument to make," Corzine said of that position. "I'm a very aggressive supporter of Senator Clinton, but I think you need at least a popular vote."

END_OF_DOCUMENT_TOKEN_TO_BE_REPLACED

"I have consistently made the case that I can win because I believe I can win, and you know sometimes people draw the conclusion I'm saying somebody else can't win," she said at a Burbank, California press conference.

Pressed further if she had said Obama can't win, Clinton said, "That's a no."

UPDATE: A Hillary Clinton staffer tells reporters covering her campaign that the New York senator did not correctly hear the follow up question about whether or not she once told Bill Richardson she didn't think Barack Obama could win in a general election. The aide said Clinton thought she was being asked if she would divulge the private conversation that she had with Richardson and answered no.

(CNN) - Former President Jimmy Carter all but said Wednesday he plans to cast his superdelegate vote for Barack Obama.

Speaking with a Nigerian paper while in Abuja, Carter noted several reasons why he might be leaning toward the Illinois senator.

"Don’t forget that Obama won in my state of Georgia," Carter said. "My town, which is home to 625 people, is for Obama, my children and their spouses are pro-Obama. My grandchildren are also pro-Obama."

"As a superdelegate, I would not disclose who I am rooting for but I leave you to make that guess," Carter added.

The Carter Center confirmed to CNN the newspaper did quote Carter accurately.

Responding to the comments, Clinton campaign spokesman Howard Wolfson said Thursday, "Both Senator Clinton and President Clinton have a great deal of respect for President Carter and have enjoyed their relationship with him over the years, and obviously he is free to make whatever decision he thinks is appropriate with regard to presidential choice."

Wolfson also acknowledged "people will be interested in the choice that he makes."

Carter's remarks are the latest from the former president that suggest he is backing Obama over rival Hillary Clinton, although he has made no official endorsement. In an interview with the Wall Street Journal in January, Carter said Obama's campaign has been "extraordinary and titillating for me and my family."

He also said then that Obama "will be almost automatically a healing factor in the animosity now that exists, that relates to our country and its government."

(CNN) - He's not the nominee. But Democratic presidential candidate Barack Obama is starting to look beyond his party's primaries and caucuses, now organizing a grassroots effort to start in June - after the final vote of the primary season.

In an e-mail Thursday, the campaign announced the launch of an "Obama Fellows" program, to train young volunteers and assign them as grassroots organizers for at least six weeks over the summer. With re-votes unlikely in Michigan and Florida, the only voters still up for grabs at that point would be Democratic superdelegates - implying Obama strategists are openly building up a structure past the party's nomination fight, and in preparation for the November election.

[cnn-photo-caption image= http://i.cdn.turner.com/cnn/2008/images/04/03/art.mccainmarch.ap.jpg caption="McCain’s fundraising totals trail those of both his potential opponents."] (CNN) - A senior McCain adviser tells CNN that the campaign’s March fundraising numbers will be “better than they usually are for us, but not competitive with Obama.”

McCain spent much of his time in March raising money. His schedule was largely dictated by fundraisers all over the country. With the exception of his week abroad, McCain on average held a fundraiser a day, and sometimes two.

Trying to look on the bright side, the senior McCain adviser said that although the campaign behind others in fundraising, starting late last month the Republican National Committee has been able to raise money through a victory fund, which can directly benefit the campaign. The RNC can raise up to $28,500 per person, as opposed to just $2300 per person for an individual campaign.

There have been several newspaper reports this week about McCain’s fundraising troubles, attributed to lack of enthusiasm from some of President Bush’s high roller donors, and overall fundraising fatigue.

CNN asked McCain on his bus Wednesday about those reports, and he said he was “puzzled” by them.

“Our fundraising, our fundraisers have dramatically increased so I don’t know where all of that comes from to be honest with you,” he said

[cnn-photo-caption image= http://i.cdn.turner.com/cnn/2008/images/04/03/art.poll.gi.jpg caption="Democratic presidential candidates Hillary Clinton and Barack Obama."]WASHINGTON (CNN) - A new poll suggests that the number of Americans who believe the country is ready for a black president is on the rise.

Seventy-six percent of those polled in a CNN/Essence Magazine/Opinion Research Corporation poll released Thursday say that the country is ready. That's up 14 points from December 2006, at the start of the presidential campaign.

"Some of the increase in the number of Americans who say the country is ready for a black president is a simple recognition of Barack Obama's success in the Democratic primaries," said Keating Holland, CNN's polling director.

(CNN) - Six hours after senior advisers to Hillary Clinton told reporters her March fundraising total would not be released until later this month, campaign sources tell CNN her campaign raised $20 million during that time period - about half of what rival Barack Obama took in for the month.