Report: Edwards rules out being VP

Edwards, who dropped out of the presidential race in January and has since remained neutral, said flatly "No" when asked by a reporter if he'd be willing to serve as the vice presidential candidate.

Edwards was the 2004 vice presidential nominee. 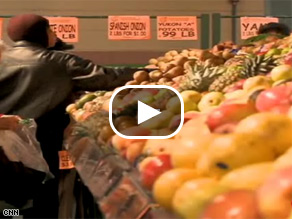 Owner Steve Safern works behind the counter slicing the meat and ringing up his stream of customers. He started Herschel's a year and a half ago, naming it for his uncle Hersh who saved Safern's father when in 1939 the Nazis rounded up and killed most of the residents in their mainly Orthodox Jewish town on the Poland-Russia border, including the brothers' seven siblings and their parents.

Safern has sold electronics to law enforcement agencies for 21 years; Hershel's is a pet project. But it's a pet project that is beginning to feel the effects of the country's faltering economy.

"The cost of milk has gone up, grains, our breads have almost doubled in the last two years," Safern told CNN, adding that his meat costs have increased as well. "When you look at the whole picture for a restaurant, everything that we do as a restaurant is going up."

Despite shrinking profits, Safern has avoided raising prices - but expects he'll have to. Unlike other businesses in the market, he hasn't had to cut back on staff but says he's working with a skeleton crew. Every time he posts a job, he gets ten times the number of applications he used to.

So what does that mean for his vote in November? "Right now the economy is probably the number one problem, I think, on everybody's mind," says Safern. "If it's hurting us in our pocket, we're all going to look for changes."

For Safern, change means voting for a Democrat - and though he hasn't made up his mind, he's leaning towards Hillary Clinton in Pennsylvania's April 22 primary.

One reason McCain tops the list is he's the only Republican left... so most Democrats choose him, while Republicans polled are split between the two other candidates.

Here are some of the reasons people don't want a particular candidate to become president:

When it comes to McCain, 27% say it's his position on the Iraq war, 25% say he's too much like President Bush and 23% say it's because he's a Republican.

One of Barack Obama’s senior advisers helped arrange public relations help for Trinity United Church as it grappled with tough coverage in the wake of the Jeremiah Wright controversy, according to a new report.

"I called Jim Terman and asked if they were interested in helping out and they followed up with the church," Axelrod said in an e-mailed statement to TPM. He added that the phone call was the extent of his assistance. Terman confirmed to the Web site that the firm is now doing pro bono work for the church.

Campaigns hit the airwaves with an economic pitch

Barack Obama's latest spot that focuses on the middle-class squeeze - "For Decades" - hit the air in Pennsylvania today. The 30-second ad debuted in Indiana last week, and is already on the air in North Carolina.

(Full Clinton script after the jump)

END_OF_DOCUMENT_TOKEN_TO_BE_REPLACED

(CNN) - The "over $40 million" the Obama campaign says it raised in March would put the total contributions the Illinois senator has raised in his presidential campaign at approximately $234 million - enough to surpass both the $200 million mark as well as the $215 million that 2004 presidential nominee John Kerry raised for that presidential primary season (then the Democratic record).

The primary campaign season formally ends with the party conventions at the end of the summer.

Obama raised $194 million through the end of February. His official fundraising tally for the month of March is due to the Federal Election Commission by April 20.

Hillary Clinton raised $156 million through the end of February. Her campaign said Thursday it would not release her March totals until the filing deadline. 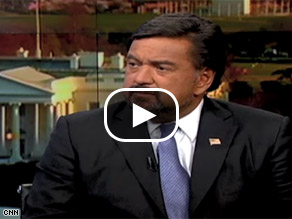 Moments after the Obama campaign announced that it had raised $40 million in the month of March, Clinton spokesman Howard Wolfson told reporters on a campaign conference call that the New York senator's fundraising figures for that month would not be released until April 20 - the official FEC deadline, two days before the Pennsylvania primary.

"We knew that he was going to outraise us, he has outraised us for the last several months," said Wolfson. "We will have the resources that we need to compete and be successful in the upcoming primary states."

He said the Obama campaign had already outspent Clinton's in Pennsylvania about 4-to-1 and that he expected her campaign would be outspent about 2-to-1 on TV ad buys going forward.

Wolfson added that they expected Clinton's tax returns to be released within the one-week time frame she had promised. Clinton actually made the pledge eight days ago.

[cnn-photo-caption image= http://i.l.cnn.net/cnn/2008/POLITICS/04/03/dem.fund.raising/art.obama.smiling.gi.jpg caption Sen. Barack Obama greets campaign volunteers during a stop in Philadelphia, Pennsylvania, Wednesday."]Barack Obama's campaign announced a March haul of more than $40 million, raised from more than 442,000 donors. There were more than 218,000 first-time donors, and the average contribution level was $96.

The figure is not official until the campaign submits paperwork with the Federal Election Commission. The official deadline for March paperwork to be filed is April 20.

Dodd: I’m not lecturing anyone to get out of the race

(CNN) - Sen. Chris Dodd on Thursday appeared to step back from his previous suggestion that the presidential race should end before many of the final round of primaries play out.

In an interview with CNN's John Roberts, Dodd - a supporter of Barack Obama - said he thinks the race will end when "the candidates decide they can't go any further.

"The last thing you want to do is lecture candidates to get out of the race," Dodd also said.

Those comments appear to differ from his remarks last week in an interview with the National Journal during which he argued an agreement should be worked out after the upcoming contests in Pennsylvania, Indiana, and North Carolina.

"Over the next couple of weeks, as we get into April, it seems to me then, that the national leadership of this party has to stand up and reach a conclusion," Dodd said then, adding it was a forgone conclusion Obama would be the Democratic nominee.

But in the interview Thursday, Dodd continued to warn against a floor fight at the party's August convention.