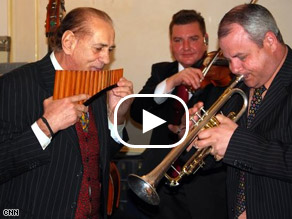 BUCHAREST, Romania (CNN) - It wasn't exactly a typical last day at the NATO summit – at least not for some members of the White House press corps.

As President Bush and other world leaders gathered behind closed doors for private meetings, journalists monitoring the events from a nearby hotel were paid an unexpected visit from an American cult figure – Zamfir, master of the pan flute.

For those who may not remember, Gheorghe Zamfir is probably best known for the late 80s/early 90s commercials that aired on CNN.

(As several colleagues have said, Zamfir paid their salaries for a long time.) But Zamfir is a true musical maestro, with a host of Hollywood movie credits, including performing for the soundtracks of Kill Bill and the Karate Kid. (Who can forget those musical montages of Daniel Larusso training for the big tournament? That pan flute was Zamfir.)

How the Romanian musician came to visit the workspace is a story in itself. Basically, he's a friend of a friend of a local Romanian working for a U.S. television network. He planned to stop by the workspace for just a brief visit to say hello, but quickly had the press corps buzzing with excitement. I asked him afterwards what he thought when he walked in and received … well, a rock star's reception.

"Shocked. When I met them, I wasn't, no words in my mouth. What's happened with me?" Zamfir said.

He immediately phoned 6 other musicians who arrived with instruments in hand. For nearly 30 minutes, Zamfir and the 7- piece ensemble performed for journalists, and even some curious White House staffers, who had gathered to watch.

Among them was veteran CBS News correspondent Bill Plante.

"I can safely say that since I've been covering the White House, which began in 1981, before the Zamfir commercials were on CNN, before CNN, I've never seen anything like this," Plante said.

Asked to explain the excitement, Plante responded, "Because it's something different. We've been sitting here trying to make news out of the NATO summit and now we have music."

Zamfir and his music brightened the mood. When he was gone, the workspace fell quiet again. But the air was lighter somehow, thanks to our unexpected visitor.