McCain: not taking proper care of veterans a national 'disgrace' 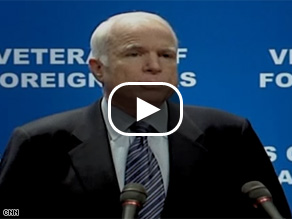 McCain’s speech Monday at the headquarters at the Veterans of Foreign Wars in Kansas City, Missouri comes in the wake of attacks by prominent supporters of Sens. Hillary Clinton and Barack Obama over the Arizona senator’s record on veterans’ benefits legislation.

“When our government forgets to honor our debts to you, it is a stain upon America’s honor,” McCain told the audience.

“The disgrace of Walter Reed must not be forgotten,” said McCain as he promised that he would do everything within his power if elected to ensure that veterans receive “the highest quality health, mental health and rehabilitative care in the world.”

Wesley Clark and Ed Schultz, backers of Sens. Hillary Clinton and Barack Obama, have recently attacked McCain over his support for bills regarding veterans’ benefits – especially given McCain’s staunch support for the Iraq war and recent efforts to tout his own military service as part of his presidential campaign.

Schultz,an Obama supporter and liberal radio talk show host, also took issue with McCain’s voting record on veterans’ benefits since 2001. “He has kicked the veteran to the side of the road like road kill with his votes,” Schultz told CNN's John Roberts.

Late last week, former U.S. Army Gen. Wesley Clark, who supports Clinton, also targeted McCain for his failure to support a bill regarding veterans’ benefits that is currently pending in the Senate.

McCain was a naval fighter pilot during the Vietnam War and spent five and a half years as a prisoner of war.