Schultz on McCain: 'The man's a warmonger' 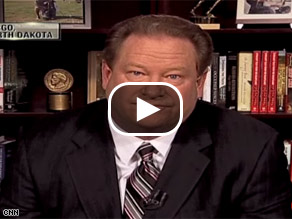 Schultz called the presumptive Republican nominee a “warmonger” at a North Dakota Democratic Party event last Friday and did not back away from the charge Monday morning.

“Labeling a candidate is not being disrespectful. And his policies fit the description, there’s no question about that,” Schultz told CNN’s John Roberts on American Morning, pointing to the Arizona senator’s positions on Iraq, Iran and Russia.

Schultz also took issue with McCain’s voting record on veterans’ benefits since 2001. “He has kicked the veteran to the side of the road like road kill with his votes,” Schultz told Roberts.