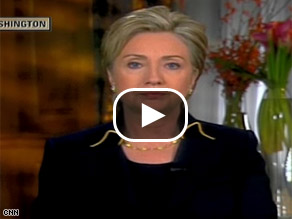 The controversy was reminiscent of that which surrounded Obama shortly before the Ohio primary, when an economic advisor reportedly told a Canadian official Barack Obama wasn't as opposed to NAFTA as he was claiming to be. Clinton sharply criticized the Illinois senator at the time, suggesting he was being disingenuous about his opposition to free trade, and went on to win Ohio by double-digits.

Also in the CNN interview, Clinton made clear she thinks the party's nominee cannot be decided until the votes in Florida and Michigan are factored in.

"We have two major states who are in limbo despite the fact they voted and their votes were certified by their respective secretaries of state, and I was willing to do a re-vote in both states and Senator Obama was not," Clinton said. "I think that if we don't resolve those, then we'll be going forward to the convention."