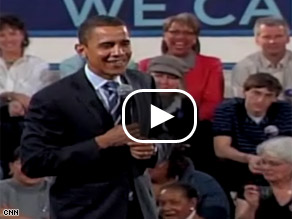 MALVERN, Pennsylvania (CNN) - It's tough wooing women when you're wearing a brown cap and standing behind an ice cream counter, according to Barack Obama

He's speaking from experience. At a town hall in Malvern, Pennsylvania Wednesday the Illinois senator answered a question on Social Security by discussing the payroll tax, which led him to the topic of his first job.

"I was working at Baskin Robbins scooping out ice cream," Obama said. "And it was actually kind of embarrassing because you had to wear like the brown cap and stuff and the apron."

"Girls would come in. You'd be trying to talk to them. They wouldn't give you the time of day because you were in this cap."

"I was making… maybe a hundred dollars a week or something and they were still taking all this money out. I thought, man, that's the payroll tax. So it's already regressive. I don't want to raise the income tax on people who are not making a lot of money already."