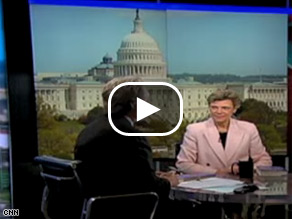 “The math is tough for her,” Roberts said of Sen. Hillary Clinton’s White House bid. “And, every time she seems to get some traction, Bill Clinton comes along and says something that throws her off again,” added Roberts.

“It’s unexplainable unless there’s some deep-seated problem there that he’s subconsciously doing.” “I can’t get over it. He’s politically so smart and yet he keeps managing to get in the way instead of being helpful,” observed Roberts.

Roberts, the author of the recently released “Ladies of Liberty,” a historical look at some of America’s early influential women, also spoke with Wolf Blitzer about why it has taken so long for the country to have a serious female presidential candidate and about how some women – especially young women – have been torn in their allegiances between Sen. Clinton and her rival Sen. Barack Obama.