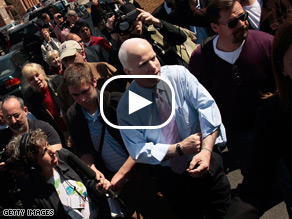 (CNN)— John McCain emphasized the importance of media on Monday saying the American public is better informed and able to make better choices because of the constant coverage of politicians.

“I will screw up sometimes and frankly so will you,” McCain said at The Associated Press’ annual meeting. “But on the whole, you and I, and most importantly the American people are better served by the openness and accountability that direct, lengthy, and frequent exchanges with the press produces.”

The presumptive Republican nominee acknowledged the downside of around-the-clock coverage saying his comments are sometimes misinterpreted and portray him in a different light than he had intended. He added that there are days that he wished the media was “somewhere else” rather than highlighting his missteps.

McCain has been criticized for not connecting as personally as he should with voters, particularly on economic concerns. But overall, McCain said he’ll take his chances with the media, “and trust in the American people to get it right in the end.”