New Clinton ad: Obama is 'out of touch' 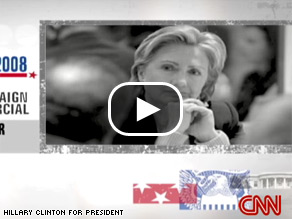 (CNN) - Hillary Clinton’s campaign released a tough new ad Monday that features the reactions of some of her Pennsylvania supporters who say they were “insulted” by Barack Obama’s controversial recent comments about some small-town Americans.

The 30-second spot – which echoes several days of similar criticism from Clinton and her campaign - features a diverse group of voters reacting to Obama’s comments a week ago that some of the state’s residents were “bitter” and turning to guns and religion because of economic pressures.

Woman 1: I was very insulted by Barack Obama.

Man 1: It just shows how out of touch Barack Obama is.

Woman 2: I'm not clinging to my faith out of frustration and bitterness. I find that my faith is very uplifting.

Man 2: The good people of Pennsylvania deserve a lot better than what Barack Obama said.

Woman 1: Hillary does understand the citizens of Pennsylvania better.

Woman 3: Hillary Clinton has been fighting for people like us her whole life.