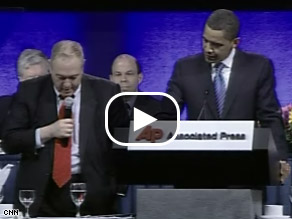 Watch the mix up Monday.

WASHINGTON (CNN) - It’s an unfortunate verbal stumble that’s plagued politicians, pundits and journalists - including CNN - this campaign season: the sound-alike names of the world’s most-wanted terrorist and the leading contender for the Democratic nomination.

Monday, the top executive of The Associated Press was the latest to make the slip. Dean Singleton was addressing a question to Sen. Barack Obama about the strategy he might use in a part of the world where many believe Al Qaeda leader Osama bin Laden is still based.

Obama himself corrected him, to the delight of the crowd. “I think that was Osama Bin Laden,” he said.

Singleton apologized for the gaffe, but Obama said the correction was becoming habit by now: “This is part of the exercise I've been going through over the last 15 months - which is why it's pretty impressive I'm still standing here.”